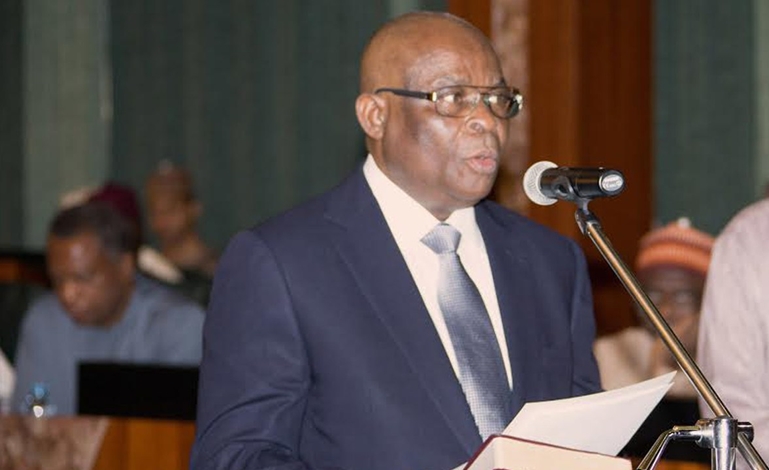 Nigerians on Monday, January 28, 2019 stormed the United States Embassy to register their grievances over the interference of the country in the nation’s domestic affairs.

The massive crowd drawn from various groups and organizations totaling over 10,000 heads threatened that next time they will be forced to shut down the embassy if that is what is required to take back the country.

The protest letter was delivered at a rally at embassy of the United States of America, Abuja on behalf of concerned citizens.

Recall that the United State had last week condemned the suspension of embattled Chief Justice of Nigeria, Justice Walter Onnoghen over issue bothering on  corruption.

Speaking at the well attended rally, Princess Ajibola urged the countries to support the Nigerian government war against corruption.

She said, “The recent happenings in the country with regards to the Judicial arm of government has indeed caused Nigeria untold embarrassment especially with the admittance of the Chief Justice of Nigeria, Walter Onnoghen that he forgot to declare some aspects of his assets as mandated by the law.

“It is such a despicable act for the number one law officer in the country to act in such a manner. The implication of this is that the hopes of the common man on the street have been dashed because the Judiciary which is supposed to the hope of the masses has indeed turned to the nemesis of the masses.

“The rot is the judicial system is such that would take the grace of God for sanity to return to the judiciary in Nigeria due to the level of corruption in the system that has resulted in money induced judgments from the magistrate court up to the Supreme Court.

“In Nigeria, judges live above their means and see themselves as mini-gods. They give judgments to the highest bidder in most instances not minding the consequences of the actions. The judiciary in Nigeria also sabotages the war against corruption by issuing injunctions to shield corrupt persons from facing the wrath of the law.

“It became typical of Nigerian courts to delay proceedings and convictions of suspects brought before it for prosecution and later handed them soft judgments after monies must have exchanged hands.

“In Nigeria today, judges live flamboyant lifestyles that one wonders if they are not supposed to serve as role models in the society.

“For long Nigerians have yearned for that leader who would confront the all-powerful judiciary in the country and God in his wisdom and mercies sent us President Muhammadu Buhari.

“We wish to state that President Muhammadu has the total support of Nigerians in the fight against corruption in the judiciary. We are solidly behind him now and always because if we do not join hands to fight corruption, we might wake up one day and realize that we do not have any country again.

“The action of President Muhammadu Buhari against the Chief Justice of Nigeria is an action for reclaiming the soul of Nigeria back from the fold of the devil and returning it to the masses who labour on a daily basis for their daily bread.

“We can boast to high heavens that the majority of Nigerians are in support of this bold move that previous governments have shy from because they too also are beneficiaries of the rot in the judiciary.

“God will bless President Muhammadu Buhari for toeing the path of the just in tackling the rot in the judiciary. And how else can we show our appreciation? The only way we can to show our gratitude is to continue to support him all the way.

“Make no mistakes, the action of President Muhammadu Buhari is just, moral, constitutional and in the overall interest of the generality of Nigerians. But they are still crying wolf where none exist.

“Going by the wages and income of judicial officers in Nigeria, there is no way the Chief Justice of Nigeria would have in his accounts millions of dollars. That is impossible. We know that such monies could only be proceeds of corrupt acts ass evident in the manner of deposits.

“If that is not the case how can the most senior ranking judicial officer in the country claim that he forgot that he has accounts that run into millions of dollars? Nigerians are not fools to believe such childish story.

“We are by this medium letting the world know that Nigerians are 100% in support of the action of our president. If our president does not do it for his country, is it America or Britain that would do it for us?

“If our president acts in the best interest of the country, is that not a good thing? Are we supposed to crucify him or support him? Or are we to pretend that all is well in the judiciary while the fat cats continue to grow fatter and the citizens’ leaner?

“The time has come for the liberation of Nigeria, and there is no going back because it’s forward ever and backward never.

“Nigeria and indeed Nigerians owe President Muhammadu Buhari a lot of gratitude for this bold step. We encourage him to continue his good deeds towards freeing Nigeria from the claws of the cankerworm called corruption.”