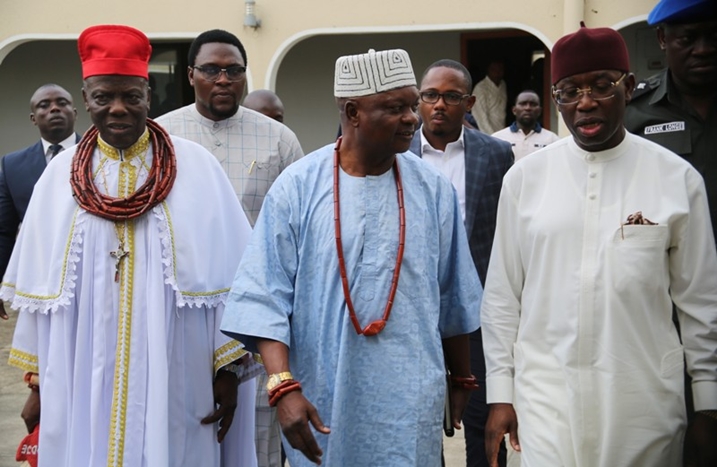 From Right: Delta State Governor, Senator Ifeanyi Okowa HRM. Ukori 1, the Ovie of Agbon Kingdom, and HRM. Orhue 1, the Orodje of Okpe Kingdom, shortly after a meeting between the Governor and traditional rulers from Delta Center, at the Palace of thee Orodje Okpe, Orerokpe, headquartres of Okpe LGA.

Traditional rulers from Delta Central Senatorial District have passed a vote of confidence on Governor Ifeanyi Okowa, expressing satisfaction with his administration’s delivery of dividends of democracy.

The traditional rulers met with the Governor on Thursday, May 17, 2018, at the Palace of the Orodje of Okpe, HRM Orhue 1, Major Gen. Felix Mujakperuo (retd), in Okpe local government area of Delta State.

Ovie of Agbon Kingdom, HRM (Engr.) Mike Omeru Ogurimerime Ukori I, in moving the motion for vote of confidence, commended Governor Okowa for the respect he has  for the traditional institution in Delta State, stating, “for the first time in the history of Delta State, we have a Governor who relates well with the traditional rulers to brief them about what his administration is doing.”

“We raised some issues which he addressed to our satisfaction,” he said, adding, “we are with you (Governor Okowa), come rain, come shine, and I, HRM Mike Omeru Ogurimerime Ukori I, move that we pass a vote of implicit confidence on the administration of Governor Okowa,” the Agbon King stated.

The motion was seconded by the Okobaro  of Ughievwen, HRM Matthew Ediri Egbi, Owahwa II and was endorsed by the more than 18 traditional rulers in Urhobo land who attended the meeting.

Orodje of Okpe in a brief speech, described Governor Okowa as  a performer, noting that the deliberation at the meeting was good.

In his response, Governor Okowa expressed satisfaction that the traditional rulers appreciated what his administration was doing to transform Delta State.

The Governor who was accompanied by the Speaker of the Delta State House of Assembly, Rt. Hon. Sheriff Oborevwori, “I came to brief the traditional rulers about what we have been doing as a government  and to thank them for keeping their kingdoms peaceful,” he said, adding, “I am here to also thank them for their support for my administration, there is no event that we have had without the presence of the traditional rulers, they have encouraged my administration in so many ways, through their efforts, Fulani herdsmen/farmers clashes did not escalate and the peaceful environment provided the opportunity for us to work in the state”.