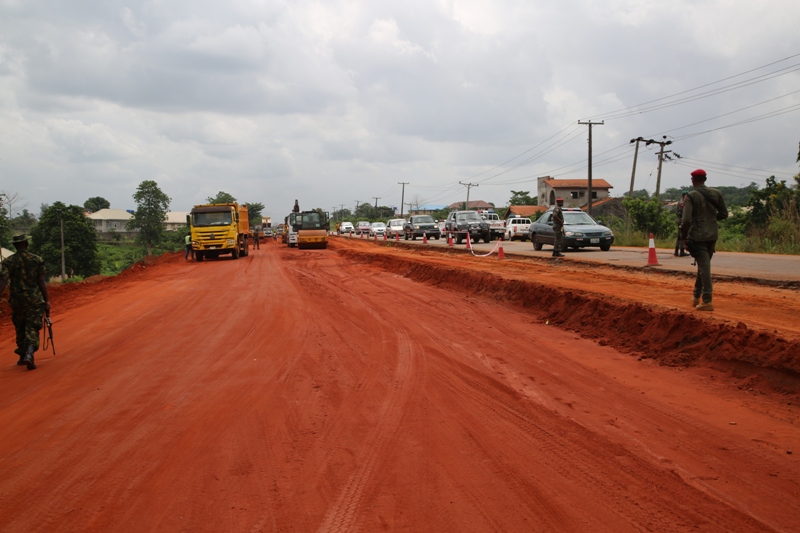 Delta State Governor, Senator Dr Ifeanyi Okowa has said that the dualisation of Ughelli/Asaba road which is expected to be completed within the next two years will ease movement of cargoes from the Warri Port to the commercial hub of Onitsha and other locations.

Governor Okowa made this assertion on Wednesday, May 15, 2019 during the inspection of part of Section C, Ogwashi-Uku to Asaba axis of the road.

The governor who was accompanied by top government functionaries said, “the contractors have two years to deliver the project but, from what we can see in the Section A and the Section C, which is from Ossissa to Asaba, the work has advanced and the construction companies have shown commitments to deliver the projects in less than two years; you are aware that the Section B part of the road which is from Ossissa to Isoko has been completed.”

“This road is very important as it serves as gateway between the Warri Port and the commercial city of Onitsha and those in the Eastern part of the country; when completed, it will facilitate ease in the movement of goods and services from Warri to Onitsha and other places”. Continuing, the governor said, “I am impressed with the level of job done on Section C of the road, within a month that the contractor mobilized to site, a lot of work has been done and we are happy; work has also advanced on Section A part of the road which is from Ughellii to Isoko and as a government, we will not stop funding the project until it is completed.”

On the secret behind the delivery of projects awarded by his administration on schedule and to specifications, Governor Okowa disclosed that before any project is embarked on by his administration, the resources to fund such projects would have been budgeted for with anticipated revenue sources.

“We are getting it right because of actual budgeting; we did well last year with our budget that we had about 98 per cent budget performance,” he added.

The Commissioner for Works, Chief James Augoye, Permanent Secretary in the Ministry, Engr. Fred Edafioghor were among those who explained the level of work done on the road project to the Governor.