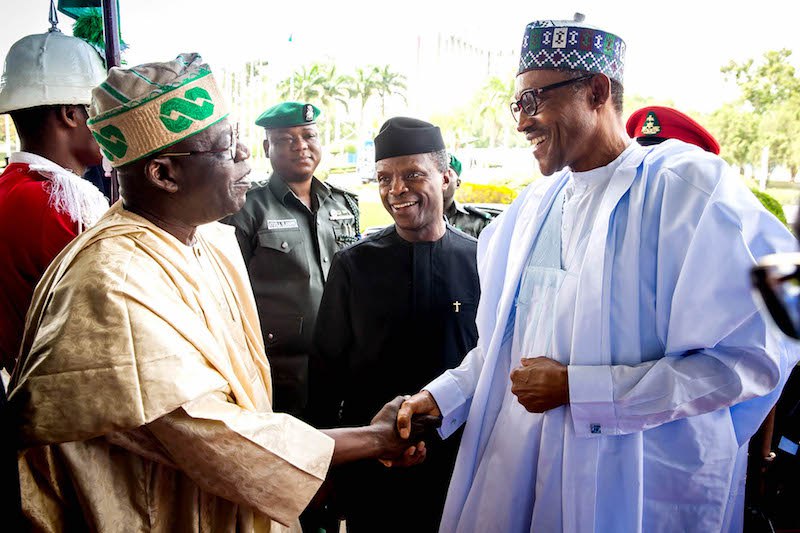 All Progressives Congress (APC) leader and Former Lagos State Governor, Asiwaju Bola Ahmed Tinubu has warned that president Buhari’s health speculators were out not only to derail the President but to decisively pit a section of the country against another for selfish gains.

According to Tinubu, the President, who Nigerians overwhelmingly voted for on March 28, 2015, because they believed in his capacity to fix the country, is on a mission – to right many of the nation’s wrongs.

He said the prevailing economic challenges were not of Buhari’s making, adding that the effect of the tumbling oil prices at the international market would not have been so biting had the immediate past administration saved for the rainy day.

Tinubu, however, said the Buhari administration has been battling to avoid the pitfall of the past by diversifying the economy from oil.

In statement entitled: “Stop the hoopla over Buhari’s health, allow the president to do his job as he deems fit”, the respected political leader, said much had changed since Buhari took over the reins of governance two years ago.

The statement reads: “Nigeria is a place of numerous challenges and the home of vast human potentials. Our greatest challenge has always been how to best direct our vast potentials so that we overcome the challenges that plague us.

“This cardinal challenge is why the APC was formed and why the party presented then General Muhammadu Buhari as its standard bearer. The people rightly chose him as their president, believing he was the best person to make Nigeria into a better nation.

“His electoral victory was historic. More importantly, like most Nigerians, I believed his presidency represented a historic mission to right many of our nation’s wrongs. I still believe so.

“The previous administration treated Boko Haram softly, appearing to view the terrorists as part of their political equation rather than a lethal threat to national security. President Buhari has gone after Boko Haram without condition and without fear. He has pushed them back, saving lives and giving northern Nigeria a chance to breathe again the air of peace and normalcy.

“My recent visit to Borno State to inaugurate projects opened my eyes to the progress President Buhari has made in the anti-terror war. An enabling environment has been created for Governor Kashim Shettima who has taken advantage of the peaceful space to initiate laudable projects, such as the provision of housing for and rehabilitation of Boko Haram victims.

“The previous administration treated corruption as its co-tenant in office. President Buhari has fought it with tenacity, equal to that with which he has confronted Boko Haram.

“We currently face stiff economic challenges. This is neither President’s Buhari’s doing nor choosing. The steep decline in oil prices caused the downturn which exposed our nation’s long-time failure to plan ahead by diversifying our economic base. It has fallen on the Buhari government to fix the immediate problem while also diversifying our economy so that we will no longer be as vulnerable to the price of oil again.

“His policies have begun to bear fruit. We are moving out of recession and toward the long-term reshaping of the national economy. Given the complex menu of problems he has faced, President Buhari has done well in a tough situation. While I seek not to diminish the hardship still faced by many of our people, we also must be cognisant of the important progress made these past two years.

“President Buhari has moved us from the path of failure to a path where we have a fighting chance to realise a better nation. Had we stuck to the ways of the former administration, our present situation would be worse than untenable.

“Those who publicly speculate about the issue of the President’s health must keep all of this in mind. Much is at stake. We owe a responsibility to be wise and circumspect in what is spoken into the public ear.

“When he returned to Nigeria on March 10, he disclosed to the nation that he had been sick to the extent that he received blood transfusion and would leave for further treatment at some future date. He said he would follow the counsel of his doctors and there is every reason to believe that he has been true to their counsel.

“Many people have openly speculated about the President’s health. Some have done so for their own selfish reasons. These people shall be found out in time. There are many who have done so out of sincere concern for the President.

“These people should not be condemned for their heartfelt concern. However, they should be advised not to allow fear to ambush their better judgment and their courage.

“They should not give themselves to idle speculation. We should not buy into the myth of some cabal at work. Dwelling in empty speculation on the existence of some mythic cabal is not what the country needs at present. From what I can see, the President remains at the helm and his policies are being implemented.

“The President is also showing his belief in process and partnership by assigning more responsibilities to the VP, which included presiding over meetings of the Federal Executive Council, thus demonstrating his trust and implicit confidence in him.

“Unfounded speculation serves no purpose other than to encourage those who would rather derail the President’s progressive agenda and who would divisively pit one aspect of this nation against another. Such chatter may foment division where there was none and this might come to impair the management of the affairs of this country.

“By fomenting animosity among groups that have heretofore been allied, those who hold to the bankrupt politics of yesterday seek to thwart the President’s mission while claiming to support him.

“Those who truly care about the President and the important work he still must do should not allow themselves to become the unwitting tools of these regressive forces.

“We must stand with and beside our President. The unfounded speculation around his health should stop. We must not covet fear and rumor but should engage our creativity and enterprise to help the President accomplish his historic mission.

“Our greatest energies should be focused on righting this economy so that it provides a decent livelihood for all people. This critical path towards economic recovery must be followed for the sake of our children.”

THE NATION
For advert placement, publication of news content, articles, videos or any other news worthy materials on this Website, kindly send mail to asabametro@gmail.com.
Continue Reading
Advertisement
You may also like...