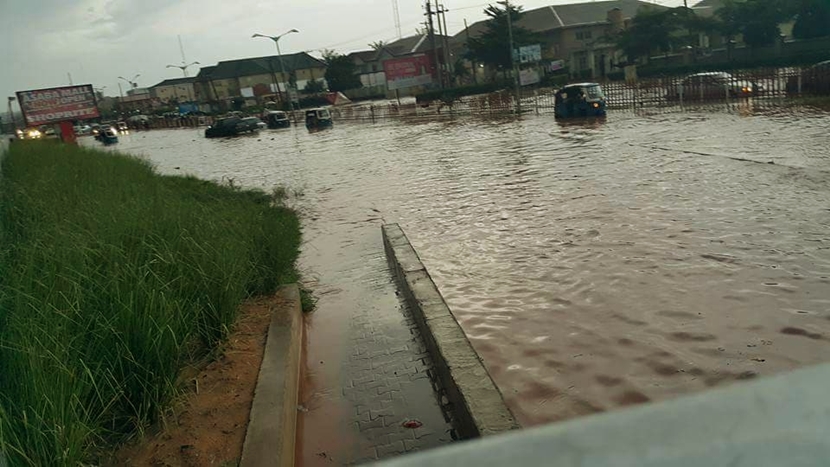 The apprehension amongst the residents of Asaba, the capital of Delta State goes up whenever the rains comes down. The people pray for the rain to go and come back another day, because of the fear of the floods.

Since the coming of the rains this year, Asaba metropolis has not been the same. The incidence of flooding has assumed a frightening and dangerous dimension.

For a visitor coming to the city for the first time, Asaba is one hell of a swamp where the rain water accumulates on the roads and highway finding no drain to empty into.

From FMC junction to the city center at Inter-Bau junction by the Multi Million Naira Asaba Mall, Okpanam road through the Legislator’s Quarters as well as DBS junction and beyond, the situation is the same. This very ugly and embarrassing scenario has put the Asaba Mall which houses the famous Shoprite and its likes, the State Police Headquarters, several banks along Okpanam Road, the Delta Broadcasting Service premises, several business centers, schools, private residences as well as the network of roads recently commissioned by the present administration in great jeopardy.

Observers have however noted that this scenario is at best an irony of some sort as Asaba lying next to the River Niger ought to have an excellent relief wherein flood waters are channeled directly through a network of drains to the River Niger and then to the Atlantic Ocean. But in Delta State, no phenomenon can ever be fully explained without considering the underlying political indices.

Ever since the advent of the present administration, Governor Okowa has embarked on an aggressive construction of intra-city roads within Asaba metropolis. In the face of the rampaging floods however, it seems that the lifespan and quality of these roads has been greatly compromised.

The last administration in a show of political brinkmanship and in a bid to score some political points awarded bogus and phoney road contracts in Asaba to the lackeys and proxies of the regime. These roads were constructed without any proper design and due diligence wherein in some instances, roads were constructed without any provision for drainage and where gutters were provided, there was nothing connecting the roads with them. It was a total disconnect, somewhat of an afterthought.

Another reason for the flooding has been attributed and rightly too to the indiscriminate construction of buildings along waterways and upon existing canals. Surprisingly however, most of these developers brandish the approval given by the previous regime for their illegal structures.

More so, as 2019 fast approaches, the issue of flooding and erosion control in the State capital is going to be a thorny issue if the present situation is not addressed. Governor Okowa must be smart to extricate himself from the failure of the past administration by providing a lasting solution to the problem.

As a first step, a critical assessment of the existing road infrastructure in Asaba should be conducted paying attention to the disconnect of the gutters from the roads. Drains should also be constructed where there are none and de-silted where they exist.

Governor Okowa must also summon the political will through the Delta State Capital Territory Development Agency (DSCTDA) to demolish the buildings and other structures standing on waterways and canals. It is understood that most of these illegal structures belong to influential persons within the corridors of power, but the interest of Deltans should always be sacrosanct and preponderant.

In doing this, the modest achievements of the present administration in the area of road construction in Asaba metropolis would be better appreciated and thereby silencing his political traducers. More so, Okowa would have erased the legacy of sorrow bequeathed by the past administration and surely win the admiration of all Deltans particularly the residents of Asaba who have been subjected to the dangers of flooding and erosion.

Grazing Reserves In The Niger Delta And A Keg of Gun Powder
OKOWA: Before It Is Too Late
Advertisement