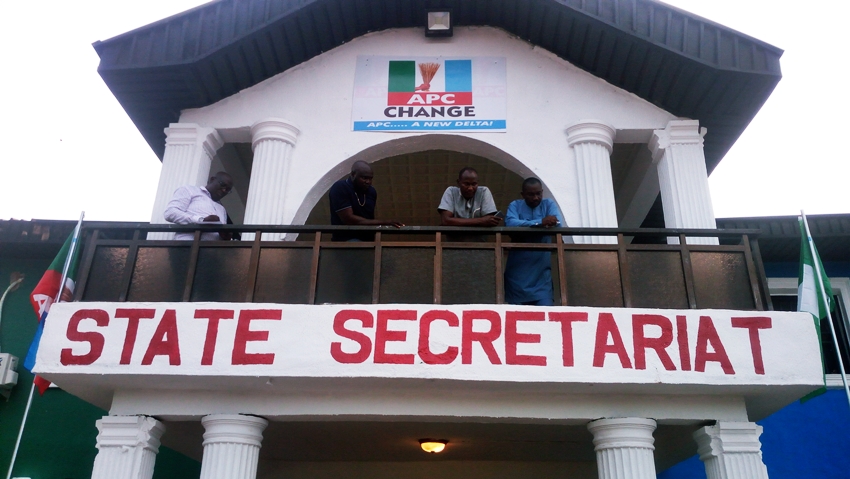 There is palpable tension in the Delta State Chapter of the  All Progressives Congress (APC) following judgement by the Appeal Court sitting in Benin, Edo State, which upheld earlier decision of the Federal High Court, Asaba restraining the party from submitting names of candidates to the Independent National Electoral Commission (INEC) for the forthcoming general elections.

The Appeal Court in its ruling Thursday, January 24, 2019, also described the application brought before it by the Chief Great Ogboru/Senator Ovie Omo-Agege’s faction and the Adams Oshiomhole-led National Working Committee (NWC) challenging the lower court’s ruling as lacking in merit and grossly incompetent.

Ruling on the case with the suit No. CA/B/541/2018 between APC and AVR vs Chief Cyril Ogodo and others, the Appeal Court also particularly held that the lower court’s ruling of August 17, 2018 on “No Submission of Name to INEC” by both factions of the party is still binding.

Justice Toyin Adegoke of the Federal High Court, Asaba, had in a ruling, ordered the APC National Chairman, Oshiomhole, INEC, Prophet Jones Erue and Plaintiffs in the case to maintain status quo and desist from submitting any list of candidates from Delta State from both factions to INEC till determination of the substantive suit.

The Chief Cyril Ogodo-led State Working Committee, backed by Olorogun O’tega Emerhor and others had approached the court seeking an interlocutory injunction restraining the APC and Adams Oshiomhole submitting names of candidate from Prophet Jones Erue led faction to INEC.

Reading the judgement on behalf of the three-man panel, Hon Justice M.A.A. Adumein said there was no issue upon which an appeal can even lie in the suit filed by APC and its national chairman (Oshiomhole) and subsequently struck out the case.

Justice Adumein noted that the appellants did not sort the leave of the lower court or Appeal Court before instituting the case, declaring that the ruling of Federal High Court on August 17, 2018 still subsist and binding on all parties.

The judge subsequently dismissed the case with a fine of N300, 000 against the appellants (APC and Oshiomhole).

The news of the ruling has being generating tension across the state leading to APC leaders in the state going into an emergency meetings to avoid another Rivers State situation.

However, while reacting to the judgement, the Delta State chapter of the All Progressives Congress, APC,  debunked reports that the Court of Appeal, Benin-City, yesterday ruled that the party has no candidate in the state ahead of next month’s general election.

The party in a statement yesterday, described the reports as “malicious, vexatious and misleading” noting that the report was sponsored by “some mischievous and disgruntled elements” in the state.
The statement which was issued by the publicity secretary of the party, Sylvester Imonina, stated that “it is not only an erroneous claim, but a total and complete falsehood and an evil misrepresentation of the judgement of the court.”
Imonina who is a lawyer in the statement, said: “The appeal filed by the All Progressives Congress through their lawyer Chief Adeniyi (SAN) Akintola was against the order/decision of the Federal High Court, Asaba presided over by the Honourable Justice TB Adegoke to handle the case filed before her by Chief Cyril Ogodo as a pre election matter.
“It was these orders made by the trial judge T. B. Adegoke on the 17th October 2018 and 1st November 2018 respectively as to procedure to be adopted by the trial court, that was appealed against by the APC.
“And in their well considered judgement, the Court of Appeal dismissed the appeal on the ground that the Appellants failed to seek leave before appealing and the orders made by the trial court on the 17th October 2018 and 1st November, 2018 remains valid, effectively sending the case back to the Federal High Court Asaba for continuation of the trial of the case before Hon. Justice T.B Adegoke.”
For advert placement, publication of news content, articles, videos or any other news worthy materials on this Website, kindly send mail to asabametro@gmail.com.
Continue Reading
Advertisement
You may also like...

Delta 2019: Remember Us When You Win, Delta North Appeals To Ogboru
AGAP Flags Off Campaign in Delta, Vows to Unseat Issues Preventing the State from Reaching its Full Potentials
Advertisement