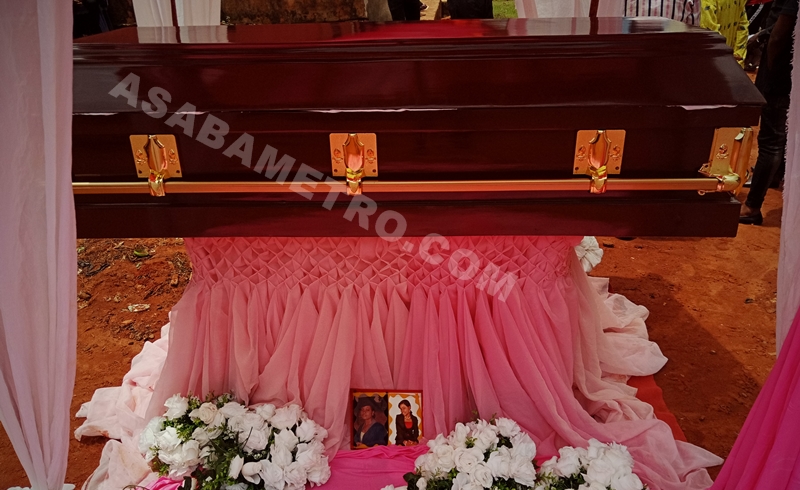 It was a sorrow filled Friday, March 22, 2019 as tears flowed freely from the Federal Medical Center, FMC Asaba to the quiet Obomkpa Community in Aniocha North Local Government Area of Delta State, where late Mrs. Rita Uchenna Uchebuego was finally laid to rest after painfully loosing her precious life in the hands of Doctors who abused their privileged office to the detriment of the lives they were trained to save.

The painful death of late Mrs. Uchebuego 2 years ago (Thursday, March 9, 2017), has been a front burner issue in the quality of medical services rendered at the Federal Medical Center, Asaba due to grave negligence frequently displayed by high-ranking Doctors hitherto this sad incident.

In a serene and solemn mood, the hearse and accompanying motorcade rode slowly through the turbulence of grieving hearts to her final resting abode.

Cladded with saddness, the husband of the deceased, Surv.  Ngozi Uchebuego who has for the past two years battled for yet to be delivered justice over the evil deed perpetuated by the Medical Personnel responsible for the demise of his wife who died few days after putting to birth a set of girls, was warmly consoled by his immediate family, in-laws, friends and the Christian congregation from House on the Rock, Asaba.

In a brief funeral service presided over by Clergymen from House on the Rock Church, solemn hymns were sang, various portions of the Holy Bible were read and prayers said for the immediate family.

Officiating Clergymen at the Funeral of Late Mrs. Rita Uchebuego

The men of God expressed confidence that She was present with the Lord, as they all aligned that she was a sound believer while on Earth.

Tributes from from Friends and Family members on the life and times of late Mrs. Rita Uchenna Uchebuego, resounded across the quiet gathering, sparking memories of a great woman who was cut down in her prime by careless attitude of some Medical Doctors at FMC, Asaba.

At the grave site in her husband’s family compound, prayers were offered for the repose of her soul and tears flowed freely as her body was being committed to mother Earth.

It would recalled that late Mrs. Rita Uchenna Uchebuego, an indigene of Mbaise in Imo State, after her Youth Service in Asaba, happily married Surv. Ngozi Uchebuego in June 2016.

Fate shown great love on the couple as they prepared to welcome a set of Twins on March 19, 2017, but an unfortunate incident occasioned by some sets of Obstetricians and Gynecologists Doctors at FMC Asaba, closed the curtain of life on her.

The husband having perceived foul play, began the sojourn for Justice which is almost near reality and so far, 8 Medical Doctors have been indicted, with the indefinite suspension of 2 from medical practice.

We shall update you with what doctors at Federal Medical Center, Asaba are battling to kill as obvious facts have emerged on the remote cause of the death of Late Uchenna Uchebuego. Watch out.