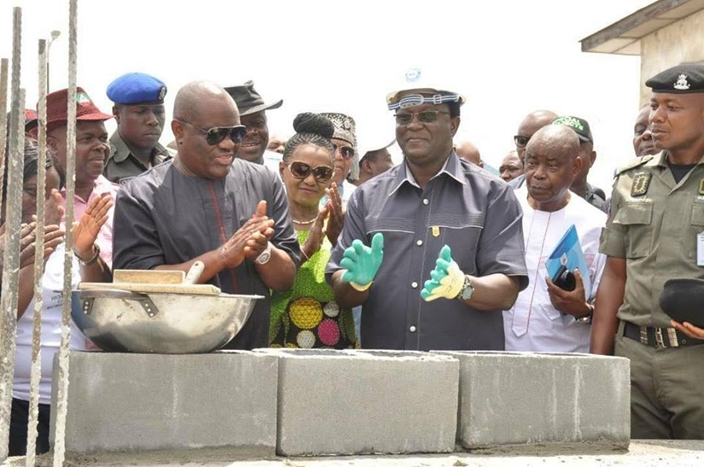 Rivers State Government has flagged off the construction of the State Secretariat of the Nigerian Labour Congress (NLC), Rivers State.

Speaking during the ground-breaking event in Port Harcourt on Friday, June 29, 2018, performed by the NLC President, Comrade Ayuba Wabba , Governor Wike stated that the State Government will also finance the construction of the Rivers State Secretariat of the Trade Union Congress (TUC).

Governor Wike said that the State Government is embarking on the projects in appreciation of the cordial working relationship with Rivers workers.

He said: “We have worked harmoniously with labour. They have not troubled this administration with unnecessary strikes . In order to build stability, we have set up a structure that will enhance the performance of labour.

“This project must be completed by December. I don’t want to hear excuses. The contractor has been mobilised. We will also build a secretariat for the Trade Union Congress “.

He said that the Bureau for Special Projects is handling the construction of the NLC Secretariat because the administration is committed to delivery of projects in line with the approved specifications and scheduled.

He announced that the one-month salary of health workers witheld due to their illegal strike will be paid because of the intervention of the NLC President. He added that the accumulated promotion of teachers will be released to them, while that of other workers will be addressed in due course.

He said: “This will go down in history as a landmark as you are one of the governors who has worked with Labour for a better society “.

He said that the partnership between labour and the Rivers State Government will lead to faster development in Rivers State.

He said: “Once workers are happy, they will put in their best and the state will benefit in terms of development “.

The NLC President added that the congress was overwhelmed by the gesture of the Rivers State Government, which will advance the productive relationship between Labour and the Government.

“Workers and employers are supposed to be partners in progress. It is when we partner together that we will be able to deliver on our various mandates. This is commendable and I urge that it should continue “, the NLC President said.

Rivers State NLC Chairman, Comrade Beatrice Itubor said by constructing the Rivers State Secretariat of the congress, Governor Wike has shown goodwill, which will be reciprocated by the workers.

Special Adviser to the Rivers State Governor on Special Projects, Alabo George Kerley said Governor Wike has enhanced governance through his projects revolution. He said the new secretariat will be a modern three-storey building with a fortified foundation to carry five storeys.

The Rivers NLC Secretariat was gutted by fire in 2015. Since then, the congress has been operating in a makeshift apartment.