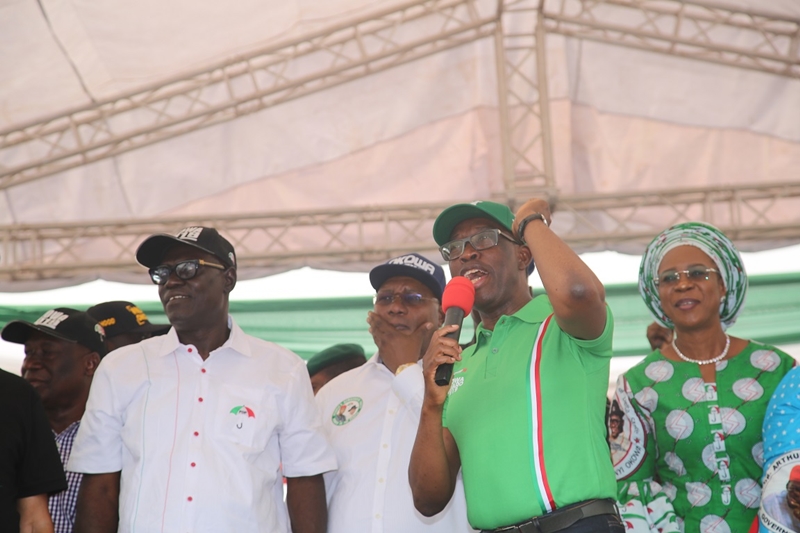 Beaming with confidence that the Peoples Democratic Party (PDP) will have landslide victory in the general elections, Delta State Governor, Senator Dr Ifeanyi Okowa has urged the electorates to be prepared to defend their votes.

The governor made the call on Tuesday, January 9, 2019 at a well attended campaign rallies of the PDP for Warri South, Uvwie and Okpe local government areas of Delta State held at the Warri Township Stadium, Effurun and Orerokpe respectively.

Specifically, at Orerokpe, Governor Okowa said, “this crowd is impressive; at all the places visited, Deltans are coming out in their large number because, they are confident this government is their own; I am confident that all of you who are at the rally ground have your permanent voter’s card, but records shows that there are still people who are yet to collect their PVCs, visit them at home, escort them to collect their PVCs because, we don’t want to lose any vote.

He continued, “during the elections, for every unit, don’t leave after voting, remain, send delegations to accompany the electoral officers to the Ward, the local government headquarter and to the state headquarter, don’t give them room to rig because, you can see that the opposition is not engaging in campaign because, they are aware that they cannot win in a free and fair contest, they don’t have campaign programmes, they have nothing to campaign with, but, we must watch them; God is with us.”

While listing some of the projects he has executed in the areas, the governor stated that if his administration could do so much in four years, another four years would transform Delta State.

At Uvwie he took a swipe at one of the gubernatorial candidates who indicated in his billboard that he should be voted for based on consistency and integrity, saying, “my opponent is very consistent in contesting in every election after which, he will run to Lagos for another four years and in the area of integrity, we are aware that for every election, he contests on another political party’s platform, is that what he meant by integrity?”

He thanked the people for collaborating with his administration to deliver dividends of democracy in practical terms, asserting at the Warri Township Stadium, “we have the youths, women and elders on our side, so, we are not afraid of going into the elections; Deltans love good things, we have agreed on the principles of rotation and it is cementing the bond of unity in our state.”

Chairman of the Campaign Council, Prof. Sam Oyovbaire stated at the events that, “I testify that Governor Okowa has performed; ask yourself what the opposition has done in Delta State, they have only brought hunger; when they meet you, ask them if they have contributed any little thing to the development of Delta.”

“Governor Okowa is working very hard and the results of his hard work are visible for all to see; our Governor has delivered first class dividends of democracy, he will complete his second term in office,” Prof. Oyovbaire, a former Minister of Information said.

Others who spoke at the rallies stated that the performance of Governor Okowa has endeared the PDP to Deltans.
At the rallies, Chairman of the party in the state, Barr. Kingsley Esiso introduced candidates of the party for different positions in the areas to the people.