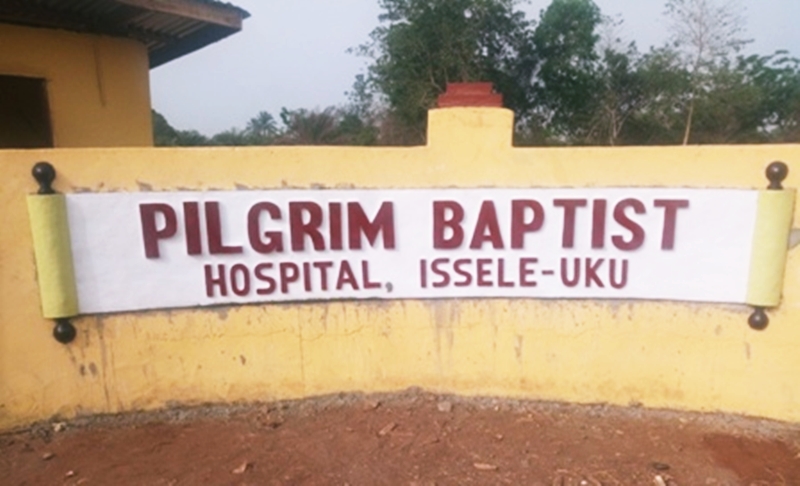 All is now set for the official reopening of Pilgrim Baptist Hospital Issele-Uku for full medical services. The reopening follows the comprehensive rehabilitation of the Hospital established by a renowned Baptist Minister and founder of the Pilgrim Baptist Mission in Nigeria, the late Rev. Dr. Samuel Wadei Martin.

According to a statement from the office of the Moderator and Spiritual leader of the Pilgrim Baptist Association, Anioma Delta Baptist Conference, Rev. Moses Ekene Okolie, made available to Journalists at Issele-Uku, the hospital will formally be commissioned by the Governor of Delta State, Senator Dr. Ifeanyi Okowa on Saturday 22nd February, 2020.

Rev. Okolie said that the event which will be graced by the President of Anioma Delta Baptist Conference, the Rev. Dr. P. F. Anyasi will be flagged-off with free medical services to be sponsored by Prince Ibe Ozoma Foundation, a foundation established by an accomplished businessman and philanthropist, Prince Ibe Ozoma in conjunction with Anioma Medical Professionals Forum Incorporated headed by Dr Alex Awunor.

The Moderator, revealed that the free medical services will hold for two days beginning from Saturday 22nd through 23rd February 2020, saying that registration of interested beneficiaries for the outreach comes up between Tuesday 19th and Wednesday 20th February, 2020 at the Pilgrim Baptist Hospital, Issele-uku as from 8am.

“The free medical outreach which is being sponsored by our beloved brother and Chairman of the Pilgrim Baptist Hospital rehabilitation Committee, Prince Ibe Ozoma, is part of the activities lined up for the official opening of the hospital and it will be featuring: general consultations, free laboratory services, free dental services, free eye screening and dispensing of lenses, free surgical procedures and health talk on nutrition and general health education.

“All the services will be provided at no cost to the beneficiaries. All that is required is for any interested beneficiary to come to Pilgrim Baptist Hospital on the 19th and 20th February, for registration where registration cards will be issued. With the card the beneficiaries will come back on the 22nd and 23rd and they will be attended to by the medical personnel of the Anioma Medical Professionals Forum as well as the medical personnel of our newly rehabilitated Pilgrim Baptist Hospital, Issele-Uku,” Rev. Okolie stated.

ALSO READ:  Delta PDP: We Must Get Back Together Quickly

He further revealed that the restructured hospital has been equipped to standard, saying that highly qualified doctors and other medical personnel has been engaged to render world class medical services in the hospital.

He also commended the Hospital Rehabilitation Committee headed by Prince Ibe Ozoma for allowing themselves to be used by God in ensuring that the purpose of God for the institutions is coming to reality.

“I am still amazed to the glory of God Almighty at the level of passion and humility exhibited by our brother and father, Prince Ibe Ozoma toward the rehabilitation of the Institutions. I make bold to say that his choice to lead the work was from God and not from any man. God at any point in time will always appoint his own to do his work and that is what I have seen in Prince Ibe Ozoma leading this great work in Pilgrim Baptist Hospital. He is not a man of denomination, but a great man of God,” the Moderator stated.

He therefore called on members of Pilgrim Baptist Association, beneficiaries of the work of the late Rev. Dr. Samuel Wadei Martin and indeed the people of Aniocha North Local Government area to come out in their numbers on Saturday 22nd February, 2020 to accord the State Governor, Senator Dr. Ifeanyi Okowa and the President Anioma Delta Baptist Conference, the Rev. Dr. P.F. Anyasi a rousing welcome as they commission the newly rehabilitated Pilgrim Baptist Hospital and the newly constructed modern 6 classroom block at the Rev. Dr. S.W. Martin Memorial Mixed Secondary School, Issele-Uku by 9am prompt.