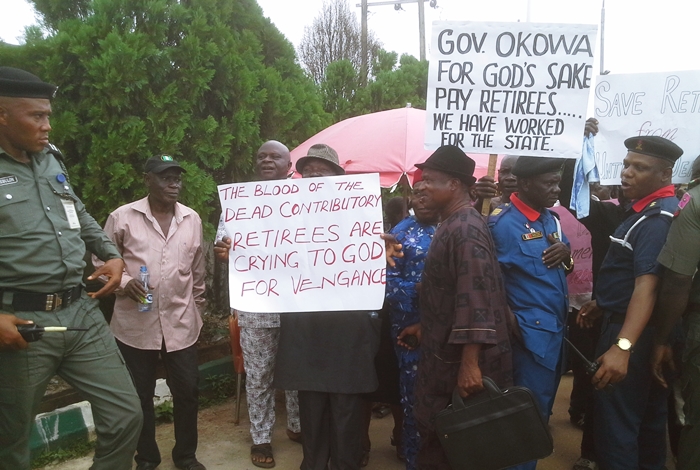 …distances self from Payment of LG Retirees.

Following the persistent protest by pensioners in the state against the Okowa-led administration in respect to the non-payment of their retirement benefits, the State Commissioner for Information, Mr Charles Aniagwu has distanced the state government from the responsibility of catering for the pension welfare of Primary School retirees in the state.

Speaking to select journalists in the state capital, Asaba on Monday, July 18, 2022, Aniagwu said the protesting pensioners are not retirees of the state government but primary school retirees under the local government councils, noting that the protests were targeted at maligning and impugning the reputation of Governor Ifeanyi Okowa was politically motivated.

According to him, the leader of the protesting retirees is Mrs Helen Ejie, APC Delta North Woman Leader and accused her of misleading the public on whose responsibility it was to pay the pensioners.

“We have it on good authority that the incessant protests emanating from a section of pensioners in the state have become politically motivated.

“The leader of the protesters is Mrs Helen Ejie, a retired teacher from Iyiatu Primary School, Utagba-Ogbe in Ndokwa West. She retired in 2016 and is the coordinator of APC women in Delta North.

“We have seen some stage-managed protests by individuals who ordinarily are supposed to appreciate what the state government has done.

“It is public knowledge that primary schools are under the local government councils in terms of how they are remunerated and how they operate.

“Sometime last year, this same woman led a few persons contrary to the reality of what we are doing they come to Asaba, rub themselves on the ground, pour invectives on the governor in line with what those who have asked them to go and demonstrate.

“They will begin to shout and cast aspersions on the person and office of the Governor. I have never seen where somebody will work in UAC and proceed to LEVENTIS to receive salary.

“What we have always done is to assist them because we believe that they are Deltans and you can recall in 2015 when we came into office, we met over seven months salary arrears owed local government council staff and primary school teachers.

“We assisted them to clear up that arrears and even when we got bailout from the federal government we gave them a grant of N3billion which aided in clearing the backlog,” he said.

On the issue of pensions, Aniagwu said the state government didn’t employ the staff but assisting because the local government councils are not in a financial position to do so at the moment.

“In the area of pensions we have also assisted them to pay, as at when we came they were getting N150m to tackle pensions and we upscaled it to N300m and to fastrack it further, we increased it to N500m monthly.

“We have so far cleared Local Government Pensions to early 2018 and Primary School Teachers owed several years of arrears of pension to August 2016.

“We have said that in addition to the N500m monthly grant, when we access the N150billion bridging finance we will release the sum of N10billion as grant to offset part of the pensions owed these pensioners by the local government councils.” he said.

On the constant attacks on the governor by a former member of the State House of Assembly, Hon. Evance Ivwurie, the Information Commissioner said it was a mere politics of bitterness and hatred.

He said Ivwurie failed to return to the State Assembly on account of not being popular among his people and had since resorted to insulting the governor for no just cause.

“He went about alleging that several funds have been taken and misappropriated but let me put it on record that all the loans we obtained are properly directed to areas they were meant for.

“As a government we will remain steadfast and stay on course in delivering our promises to Deltans,”

Aniagwu also took a swipe on Minister of State For Labour and Employment, Chief Festus Keyamo over an uncharitable comment on the state-of-affairs in the state.

He reminded Keyamo that students who were supposed to be in school are still at home because of lingering ASUU strike that the federal government failed to resolve.

“We need to remind Festus Keyamo that in Delta, our universities are working while the ones that belong to the Federal government are still at home.

“We remind Festus Keyamo that our children who are supposed to be in school are still at home and we urge him to work seriously with his senior colleague to ensure that the issues raised by ASUU are resolved as soon as possible,” he stated.