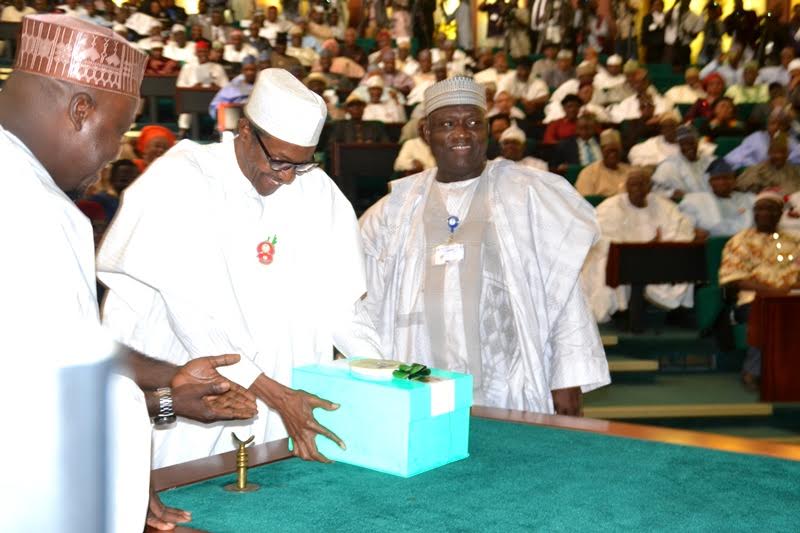 Addressing the joint session of the National Assembly, President Buhari said that the implementation of the 2016 budget was hampered by low crude oil prices and that the 2017 figure has an increase of 20.4% over the 2016 figure.

President Buhari said at the ceremony that government benchmarked the 2017 budget at N305 naira against one US dollar ($1) .

He said the budget is also predicated on daily crude oil production of at 2.2 million barrels and at $42 per barrel.

He explained that for the country to effectively diversify from oil, it would need oil money for the movement.

Tagged budget of economic recovery and growth, he said, it was centered on agriculture and manufacturing.

He said that the budget would bring the nation out of recession.

The President said that government would continue to fortify “our defence’’ and spend on it till “all our enemies within and without are subdued.”

He said that government would retain N500 billion social intervention fund in the 2017 budget.

The President appealed to governors to make land easily accessible to farmers to boost food production.

Breakdown of allocations to ministries and government parastatals revealed that Key capital spending provisions would be on power, works and housing, which have been allocated the highest amount of 529 billion naira, followed by transport – 262 billion, social intervention – 150 billion, defence – 140 billion while the judiciary got an increased allocation of 100 billion naira.

The sum of 51 billion naira was also allocated to health.

Amnesty programme will receive N65 billion in the 2017 budget.