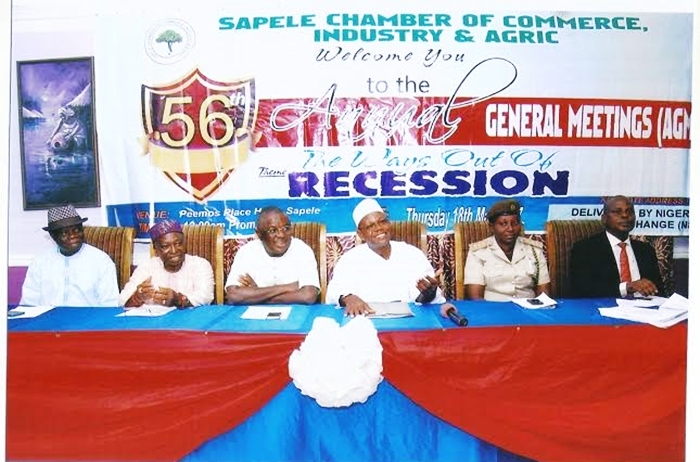 The Chairman of Sapele Local Government Council Hon. Barr. Ejaife Omizu Odebala, has attributed the dwindling fortune of Sapele Township to consistent federal government policies over the years and not the making of the political class.

The Sapele Council Boss who responded to the speech from the president of the Sapele Chamber of Commerce, Agriculture and Industry Prince David Iweta on the occasion of their 56th Annual general meeting, (AGM) held at Peemos Place Hotel in Sapele, Delta State said “with the removal of Sapele Sea Port at Ogorode – Sapele, and turning same to Naval Engineering College, the former economic hub of Nigeria suffered a serious setback as a result”.

He added that the construction of the Gamon bridge over River Ethiope prevented vehicles coming into Sapele city from the “Pontu” area which added more to the economic life of the city then as foreigners from the town now move to other parts of the country with this unfolding development.

Hon. Odebala argued that succeeding Sapele Council Chairmen including himself at various stages “have lobbied government to attract development to the town which informed the construction of the Sapele ultra modern market now at an advanced stage for re-occupation by traders including other laudable projects that they have attracted to the ancient city”.

He added that the closure or relocation of companies from the community has no link with the people of Sapele, rather they are leaving because they do not have cash to operate further, assuring that “they leaders will do all it takes for the town to come back to life”, just as he promised members of the Sapele Chamber of Commerce, agriculture and industry that because of the passion they have for the community, he has decided to be an active member of the group.

Prince Iweta noted further that Sapele Chamber of Commerce is the first chambers of commerce in the old Midwest region and the entire South-South region to produce the first National president of NACCIMA, in the person of Olorogun Chief Matthew O. Origbo and at the verge of producing another National president by the next 6 – 12 years.

The president lamented that Sapele, a city, which history recorded, was the 2nd Urban city in Nigeria next to Lagos as in gazette of the Township ordinance Act of 1927 of the Federal Republic of Nigeria, a city formerly referred and called “COSMOPOLTIAN CITY”, is now highly regrettable that this great city with her proud people is not measuring up to occupying her place amongst the comity of cities owing to several reasons that will make her now be best described as “FAILING CITY”.

The president of the chambers a business magnate added that even though the local government authority in collaboration with the traditional power house created a formidable strategic alliance with organized private sectors, bodies like the chamber of commerce to reach out to the various arms of government, and international institutions on ways and means to better the commercial and industrial activities of the Sapele/Okpe Community, it is regrettable that they are not in any way close to this level of understanding and integration.

Prince Iweta, revealed further “Sapele was a beehive of activities at night where people move freely from 6.00pm – 6.00am but all these has evaporated over time due largely to lack of money in the pockets of parents to educate the young ones that has given birth to unemployment and unemployable youth that has become overgrown crime babies and insecurity has become the greatest fear that occupy our attention”.

The president who intimated the people of their January 2018 AGM where the batten of leadership of the chambers would be changing hands, commended the Nigerian Army, the Nigerian Police, the Judiciary and other Agencies of the Federal Government present in Sapele for their very supportive contribution in promoting peace and protecting lives and properties, appealing to Sapele people to co-operate with them the more so that more of their efforts will come out.

Mrs. Akpomejevwe Judith Nwuchukwu, Chief Executive Officer of Judnite Company Nigeria Limited a member of the chambers who moderated the event, Chief Gabriel  ofotokun, Mr. Ikemefuna and other members appealed to all and sundry in Sapele community to put hands on deck to move Sapele community forward.

Mrs. Nwuchukwu said in a time of economic recession as we have it now, the only way we can forged ahead is to develop our potentials and make things work out for ourselves and as well the entire Sapele community remaking that Sapele community cannot be economically viable again expect we all makes it work on our own.

The 56th AGM of the Sapele Chamber of Commerce, agriculture and industry which have in attendance business men and women, Captain of industries, entrepreneurs, also featured a keynote address delivered by Mr. Dumebi Ohanwusi, Head Dealer Solid Rock Securities and Investment Plc on the topic “Developments and opportunities in the Nigerian Capital Market – What is in it for us?”