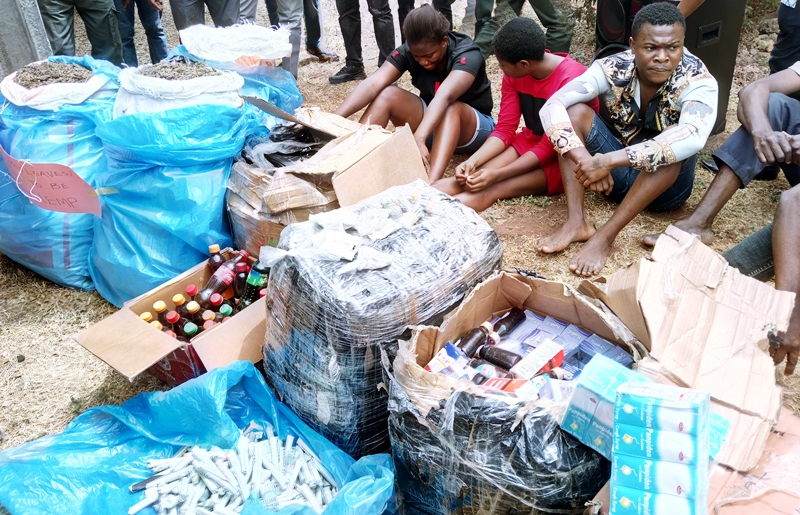 Five suspects in possession of substances confirmed to be Cocaine, Indian hemp, Codeine and other liquid contents worth millions of Naira have been arrested in Asaba, Delta State by the Nigeria Police.

The suspects nabbed with the prohibited substances were on Tuesday, February 11, paraded alongside over 80 suspected criminals at the headquarters of the State Police Command in Asaba.

Commissioner of Police, Hafiz Mohammed Inuwa in charge of the command at his maiden press briefing and parade of suspects arrested in the state since assumption of duty in Delta on January 2, 2020, credited his achievements within the period under review to the confidence reposed on him and his officers through collaborative efforts.

While recounting that the journey hasn’t been easy, especially the ultimate sacrifice paid by some officers who lost their lives in the line of duty, CP Inuwa flanked by top management team of the command said, “this has not deterred us but has rather strengthened the personnel of the command by putting extra efforts to achieve these remarkable achievements”.

On the recovery of Indian Hemp (weed), packs of Codeine, liquid mixtures and Cocaine, the CP informed that the cases were still under investigations to enable the Police seamlessly transfer the suspects to court.

He narrated that, “On the 09/01/2020 at about 1310hrs, based on information, the house and premises of one Lawrence Owoh ‘m’ indigene of Ebonyi State, resident at GRA, phase 5 behind Ibori Golf Course Area, Asaba was raided by personnel of Crack Squad, Asaba and one Lawrence Owoh ‘m’ was arrested. Exhibits recovered- two (2) cartons of treated weeds, three (3) bags of wrapped Indian hemp, five (5) and half bags of Indian hemp, two (2) cartons of codeine, one (1) bag containing liquid substance suspected to be soaked Indian hemp with spirit drink, fifteen (15) liters of liquid substance suspected to be soaked Indian hemp, one (1) carton of rizzler and cash sum of four hundred and sixty four thousand, two hundred and seventy naira only.”

Continuing, “On the 17/01/2020 at about 0630hrs, based on Information, the house and premises of one Arinze Ibenezim ‘m’ indigene of Rivers State, resident at Flat 2, Chief Odogwu close behind Central Bank of Nigeria, Asaba was raided by personnel of Crack Squad, Asaba and one Chiamaka Ibenezim ‘f’ 25yrs, Uchenna Azubuike 28yrs, Innocent Chiweke ‘m’ 30yrs and Ibe Nwosu ‘m’ 29yrs were arrested. Exhibits recovered- Eighteen (18) wraps of substances confirmed to be cocaine, other items tied in three nylons confirmed to be crack cocaine, sixty (60) pens used for sniffing cocaine and cash sum of N194, 500”.

The command on the watch of CP Hafiz Inuwa since January 2, 2020, has apprehended 41 armed robbery suspects, 8 kidnappers, 16 cultists, 8 internet fraudsters, 4 murder culprits and 8 for stealing with a total recovery of 35 firearms, 266 live/ expended cartridges and 62 live ammunition.

Some paraded criminal suspects and recovered items by Delta Police