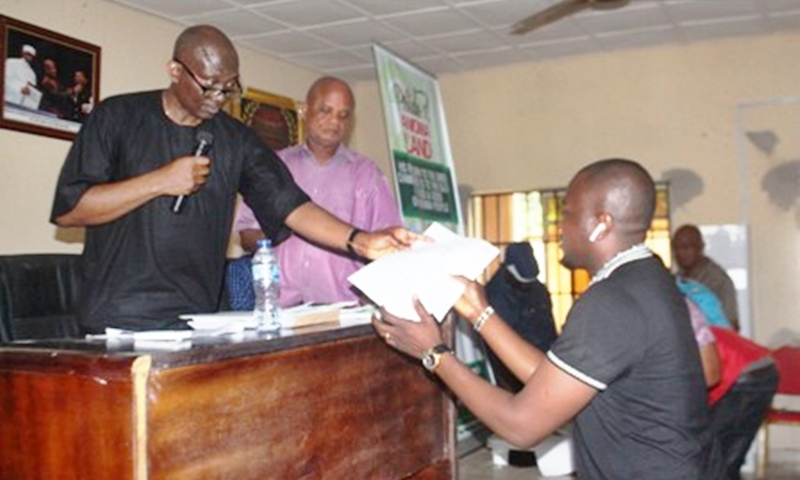 Minority leader of the Federal House of Representatives and member representing Aniocha/Oshimili Federal Constituency, Rt. Hon Ndudi Elumelu has issued appointment letters to a total of 125 women and youths, as Personal Assistants and Political Aides to the lawmaker in their various, units and wards across the constituency.

The official presentation of appointment letters to the selected women and youths, which took place at Onicha-Uku, the country home of Rt. Hon. Ndudi Elumelu, on Friday October 25, 2019, was in fulfillment of his campaign pledge to ensure the even and equitable distribution of democracy dividends across the length and breadth of Aniocha/Federal constituency and also justify the mandate freely given to him by his constituents, as their Representative in the national assembly.

Addressing the newly engaged appointees during the presentation of letters ceremony, which was attended by top party leaders and members of the PDP in the Federal constituency, Hon. Elumelu charged the political aides to carry out specific roles on his behalf, which included interfacing with communities and identifying their most pressing needs for onward transmission to the leadership of the Federal House of Representatives.

According to him: “Your duty will be to be my voice in your community. You don’t need to call me, you are to collate whatever is happening and needed in your community and forward to our office in Abuja. We now decide what to do in such matters.

“On infrastructural development, if the roads are bad, markets are bad and you fail to shout out, you will be held responsible. We want government to be close to the people.

“People, who are less privileged and not able to pay their school fees, tell us about them and everything happening in your area. I don’t want people to be calling every time and sending text messages, you should be the ones receiving the messages and sending such to us.

“The day anybody sends me text message from your community, complaining of any need, or that their son or daughter needs job or that we have such problem in my area, when you are there, your appointment is immediately terminated.

“You should be committed to your work. Disturb us with pressure of requests. Let’s have a change of mindset in the manner we approach issues. This is the first time money meant for constituency people are given to them. Nothing in the community must escape your attention. If anything is coming to your constituency, you must ensure your people get their own portion,” he charged them, while saying that his office will provide them with identity cards.

Hon. Elumelu further explained that the appointment is for a period of two years which is subject to renewal, subject to the performance of the appointee, even as he assured that there is a lot coming for the constituency; hence they must be ready to carry out the huge task assigned to them.

He said: “If motorcycles are to be given out and your people do not have, you will answer for it. A lot is coming. If people are in prison and do not have money to bail themselves, you should go to the prison and find out the issues and report to us. We don’t want any complain from any community, we want every community to be carried along in all we are doing.”

Fielding questions with newsmen shortly after the presentation of appointment letters, Hon. Elumelu shed more light on the rationale behind the appointment of the 125 political aides to be his eyes and mouthpiece in the over 58 communities in the federal constituency.

“My people voted me into office and it is expected that their votes in getting me there is their investment. Their return on investment is for me to make sure they have good dividends of democracy.

“In trying to get that I must be sure that I’m doing it in consonance with their own belief and their desire. And there is no better way to achieve that than engaging them. And given that we have over 58 communities in the four local governments, it now became very necessary that I must appoint some political aides to do that on my behalf.

“Their job involves going to the people and finding out what they want and that will form part of the input which the House of Reps is geared towards achieving in the yearly preparation of the budget.

“We held a public hearing on the budget two days ago and part of what we said was that we now want Nigerians to be part of our budget preparation processes. I cannot just on my own go to the House of Reps, sit down and put things for my people without hearing from them.

“These are my aides, and between now and November that we will be passing the budget, their duty will be to get back to me on what my people desire most and that will begin the way towards giving them those returns on investment that is called dividends of democracy.

“And the ingredients are critical infrastructures, good roads, electricity, potable boreholes that will ensure access to quality water and areas where you can assist people who cannot afford to train their kids, then you provide for them. And that will be very useful and meaningful to them.”

Elumelu said the appointees which comprise 62 youths and 63 women will get their salaries on 27th of every month, adding that in December, they will be paid double, first week and 27 of December every year.

Responding, some of the appointees expressed appreciation to Rt. Hon. Ndudi Elumelu for finding them fit for the appointment. Stephen Abah from ward 10 Ezi in Aniocha North expressed joy for the appointment, saying that this was the first time he had been privileged to get an appointment and benefit from an elected member in any position since he joined the party many years ago.

Mrs. Ndidi Azuh, ward 5 Aniocha North Issele Mkpitime and Issele Azagba, said she is lucky to be one of those appointed, pledging her readiness to work and ensure everybody in her ward benefit from the democracy dividends that will be coming to the constituency.

Alex Nwokolia from ward 9, Oshimili North, Okpanam and Ugbolu, said in carrying out his assignment, nobody will be discriminated against, assuring that he will work to ensure his ward members benefit from whatever is due to them.

Christy Ngugu from ward 9, Oshimili South in Asaba, comprising Ozoigwe primary school area through to Anwai, said she was happy for the appointment, adding that everybody in her area, as far as they reside in the ward area will benefit from the leadership programmes of Elumelu.

Mrs. Sandra Obiarinze from ward 2, Aniocha South, Ogwashi Uku said the gesture was a good one from the Rt. Hon. Ndudi Elumelu and while describing him as a man of his words who will always fulfill all the promises he made to his people, assured of surpassing the task assigned to them saying: “I will do much more than the task given to us. He is for everybody and everybody will be accommodated in his programmes.”

It could be recalled that the Minority leader of the House of Representatives and member representing Aniocha/Oshimili Federal constituency, Rt. Hon. Ndudi Elumelu, had last month, confirmed that he would engage 84 competent persons as youth in the Federal constituency as personal assistants and political aides in youth and women affairs. This number has now been increased to 125, in recognition of the need to effectively cover the over 58 communities in the constituency and also in line with his campaign promises to empower the critical segments of the society; the Youths and the women whom he said would continue to be the focus of his agenda, in consonance with the Stronger Delta agenda of the Governor Ifeanyi Okowa administration in Delta state.

This appointment of 125 political aides by Hon. Ndudi Elumelu, is also coming in the wake of a hugely successful five-day entrepreneurship training programme for budding entrepreneurs from Aniocha/Oshimili Federal Constituency of Delta State, in September, sponsored by the Minority Leader of the House of Representative, with 200 participants drawn from the four local government areas within the Federal Constituency.

The training programme facilitated by Hon. Elumelu was organized and handled by Small and Medium Enterprises Development Agency of Nigeria (SMEDAN), a reputable entrepreneurship development training organization and ended on Friday 20th September, 2019 with the House of Reps Minority leader, presenting the certificates of participation to the participants, which also guaranteed each of them a low interest loan up to the tune of N10 million by the Central Bank of Nigeria, CBN, with no collaterals.