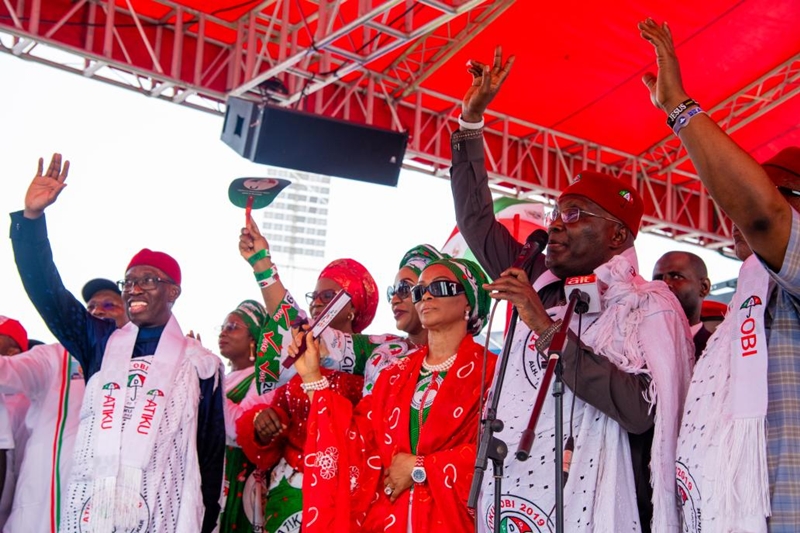 …Says Okowa Has Given Boost To PDP Through Project Delivery.

Presidential candidate of the Peoples Democratic Party (PDP), Alhaji Atiku Abubakar has promised to revive all the sea ports in Delta State and complete the second Niger Bridge when he emerges as President.

Alhaji Abubakar gave the promise Thursday, January 31, 2019 during the Presidential Campaign rally of the party in Asaba. Thousands of Deltans took over all available space at the Stephen Keshi Stadium and spilled through miles on Nnebisi road, Asaba in solidarity with the PDP.

Excited with the huge turnout of people, Alhaji Abubakar commended Governor Okowa for improving on the fortunes of the PDP assuring, “I will reactivate all the sea ports in Delta State and you know that my wife is from Onitsha, so, we won’t have any option than to complete the second Niger Bridge.”

“I promise you that our elections, all the infrastructure projects that have been abandoned by the Federal Government will be completed; the All Progressive Congress (APC) has failed to deliver; for you to continue reaping the benefits of good governance, continue to vote for PDP; we are all members of the PDP family, no space for APC.”

He continued, “your Governor, Senator Okowa is one of the best Governors this country has produced, we are grateful to Deltans for being loyal to the PDP since 1999; the roads that you have in the state came through the PDP, most of the development in the state were done by the PDP, so, why will Deltans not vote for PDP?”

Governor Okowa at the rally, stated that Deltans are peace-loving and his administration has built bridges of unity among the people which Alhaji Abubakar will replicate once he emerges as President by uniting all Nigerians and making them to live in peace.

The governor listed the achievements of his administration in the health sector, job creation, health, road construction and summed it up by calling on all Nigerians to vote for the PDP candidates in the forthcoming elections as such would attract development to the country.

“The most important thing to us as a people is that we are seeing the future, a future which the PDP will bring peace to our entire country; we are prepared for the elections and from the crowd we have today, you (Alhaji Abubakar) will be encouraged to know that Deltans will vote PDP in large numbers, and we will defend our votes,” the governor said.

Director-General of the Campaign Organisation, Senator Bukola Saraki, who danced to the admiration of the people, congratulated Governor Okowa for his developmental efforts, especially, for constructing the Stephen Keshi Stadium, noting that the governor “understands the act of governance.”

Saraki who is the President of the Senate said it was important for Nigerians to vote for Alhaji Abubakar because, such will boost the confidence of investors, boost the economy and create job opportunities for the people.

“Investors do not go to countries where there is no rule of law, countries where security of lives and property is not guaranteed; don’t waste your votes for the APC, don’t be afraid, we will monitor the votes so that they cannot rig, a vote for Alhaji Abubakar is a vote to boost our economy, provide jobs for our people; vote for the PDP,” Senator Saraki said while the National Chairman of the party, Prince Uche Secondus warned that any attempt to rig the elections would be resisted and spell doom for the country.

“We are aware that there are patriotic Nigerians in INEC, if the election is rigged, there will be war because, everybody is ready for the elections; the security agencies should obey the constitution and be neutral or else, there will be crisis,” Prince Secondus said, adding, “Nigerians should come out and vote and defend their votes because, the votes must count so that we can vote out someone who has brought disgrace to the nation.”

He continued, “we need digital President and Atiku is that digital President; Alhaji Abubakar can interact and engage the youths, he will be in charge and the government would not be in the hands of cabals.”

Others who spoke at the rally include, Chief Benjamin Elue, Prof. Sam Oyovbaire, and Senator Stella Omu.

Delta 2023: Mulade Disagrees With Okowa Over Governorship Slot For Urhobos
2019 Election: Waive gets Party Flag; as Ogboru, Omo-Agege Drums Support for Him
Advertisement