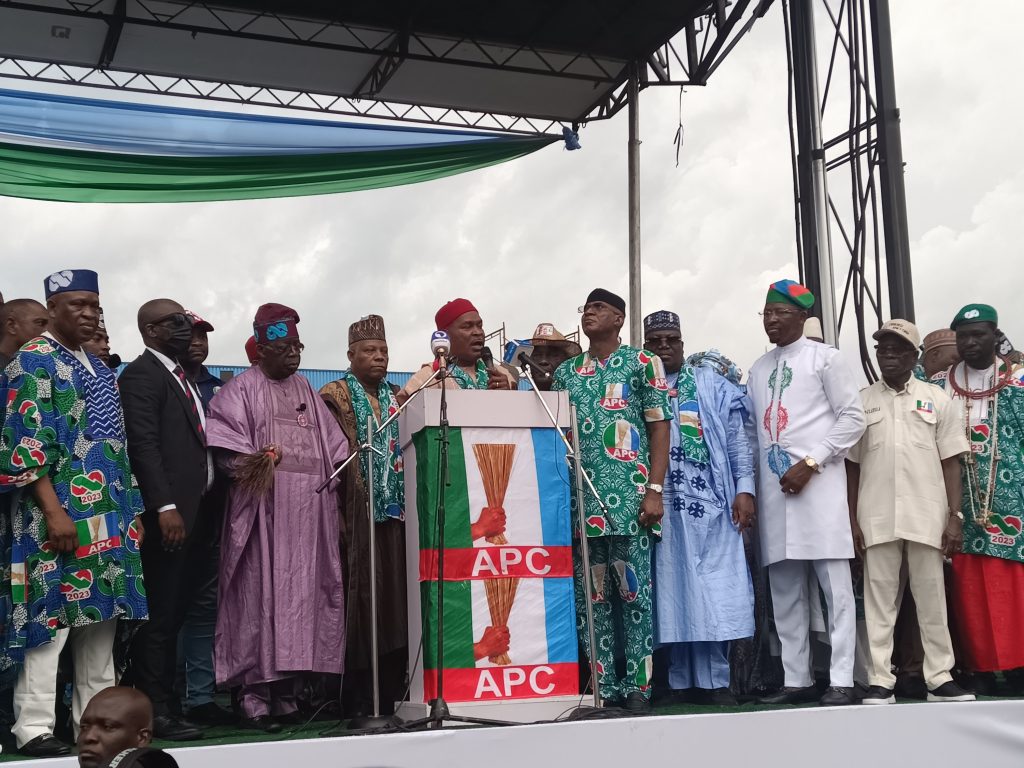 APC flags off Presidential and Governorship Campaigns in Delta state.

…as Omo-Agege Asks Okowa To Step Down VP Ambition.

Presidential Candidate of the All Progressives Congress (APC), Asiwaju Bola Ahmed Tinubu has slammed the Peoples Democratic Party (PDP) for failing to develop oil-rich Delta State despite the huge resources accruing to the state since 1999.

Tinubu made the observation, amid intermittent chants of ‘Jagaban,’ at the party’s kick-off rally, which took place on Saturday, November 19 at the Warri Township Stadium in Warri South Local Government Area of the state.

At the Warri City Stadium also were thousands of excited Deltans and APC faithful who gave a rousing welcome to the presidential candidate, the state’s governorship candidate and their entourage on arrival.

Tinubu, while addressing the rally, accused the opposition party of abandoning infrastructural development in the state and leaving the state in decay and penury.

“Delta is among Nigeria’s largest oil and gas producing states. Revenue from oil and gas has historically been the backbone of government revenue and foreign exchange earnings.

“As such, your state and other oil producers have made a one-of-a-kind financial contribution to the building of modern Nigeria. The nation is thankful to you.

“Delta has all it takes to be great and help lead the nation forward. Yet, for the past 23 years, those governing your state have taken you for a hard and long ride by selling you short. They have not done the things they should have and could have done for you.

“The infrastructure in the state was better 30 years ago than it is now. The state has recorded historic debts run up by the incumbent yet the infrastructure and other things still remain lacking because of under-investment and neglect.

“The money is much, but it does not have legs. Where did it go? Not to your welfare. Perhaps, it has found a home with a certain presidential candidate who loves Dubai more than Nigeria.

“But Delta State is not an ATM for migratory politicians. It is a place where good and hardworking people reside and work to create decent and peaceful lives for themselves and their families,” he said.

Speaking on his plans for the state, which he described as another home to him, Tinubu promised to re-activate the gas revolution industrial park while also seeing to the cleaning of the whole Niger-Delta region to ensure that the host communities do not suffer for building the nation’s economy through their oil.

“I want to welcome you to Delta State, we are hospitable people because we don’t tolerate traitors. Most of us here are Christians and we know what the Bible says about traitors the most famous traitor we have in the Bible is Judas and today the latest traitor in southern Nigeria is the Governor of Delta State, the man who is now engaged in ill fated adventure to become the vice president of Nigeria. He is the replicate of Judas Iscariot today and to the extent that he has refused to commit political suicide just as Judas Iscariot did. We are asking him to step down immediately from holding the ticket of Atiku Abubakar,” he said.

Speaking further he noted that Delta State is in a serious despair. “Delta State is supposed to be one of the riches state in Nigeria and in Niger Delta. But despite all our endowment by way of our 13percent derivation, by generated revenue there’s nothing to show. My President we rod on the road to this stadium and we can see that Warri has become the headquarters of Keke capital in Nigeria,” insisting that the people of Delta State are tired of suffering in the midst of plenty.

“Our people are very angry they want the narrative to be changed. Instead of development, all they hear is about Okowa taking more loans. Delta State is the second most indebted state in the federal Republic of Nigeria. Today all Deltans alive and yet unborn are all indebted because of Okowa recklessness. To add insult he has decided to bring his stooge a man who will continue from were he stopped. And our people are saying no they have decided to reject Okowa stoogeto reject Okowa stooge“.

Agege added that he has the experience and has served as the executive Assistant to the Governor of Delta State, as a Commissioner and Member of the State Executive Council, as Secretary to the State Government and as a Deputy and Senator of Delta Central.

“I will put all the experiences I have gather over the years to the service of my people. I have taken development to even outside my constituency. My people know that I can even do more as the Governor of Delta State.

He however appealed to the people of Delta State to vote the APC presidential candidate, Tinubu and all APC candidate across the state.