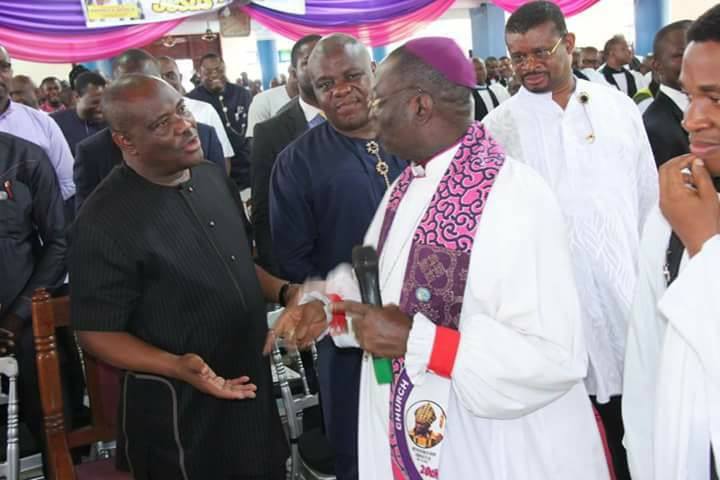 Governor Wike challenged the Federal Government to publish the account where it paid N34billion in respect of the Paris Fund Refund due to Rivers State.

Speaking during the First Session of the 8th Synod Thanksgiving Service of the Anglican Province of Niger Delta, Governor Wike said: “As I speak to you, no N34billion has been paid to Rivers State. I challenge the Federal Government to show Nigerians the account they paid the N34billion “.

The governor explained that the State Government judiciously deployed the N17billion and monitored the use of the Local Government funds for the payment of outstanding salaries.

He said: “I read on the pages of Newspapers that Rivers State received the highest amount of the refund of the Paris Club to the tune of N34billion. I want to say categorically, that is not correct.

The governor added: “We are the only three states that were short changed. They paid all other states completely. So we started fighting. We raised alarm and they said we still have N3billion.

The governor stressed: “If they say that, we are entitled to N34billion, Okay. Being entitled and paying the money are two different things”.

He assured the people of the State that the Paris Fund Refund will be used to pay for the Garrison-Trans Amadi-Elelenwo road, the Woji-Akpajo Bridge and road, the Elelenwo – Akpajo Road and other key projects across the state.

“They should come to Rivers State and see what we are doing with our money in comparison with the “change” states.

Speaking further, Governor Wike charged Christians to actively participate in the 2019 General elections to determine their leaders. He said Christians must discard the lukewarm attitude to governance.

He urged Church leaders to mobilise their members to register in the course of the ongoing voters registration.