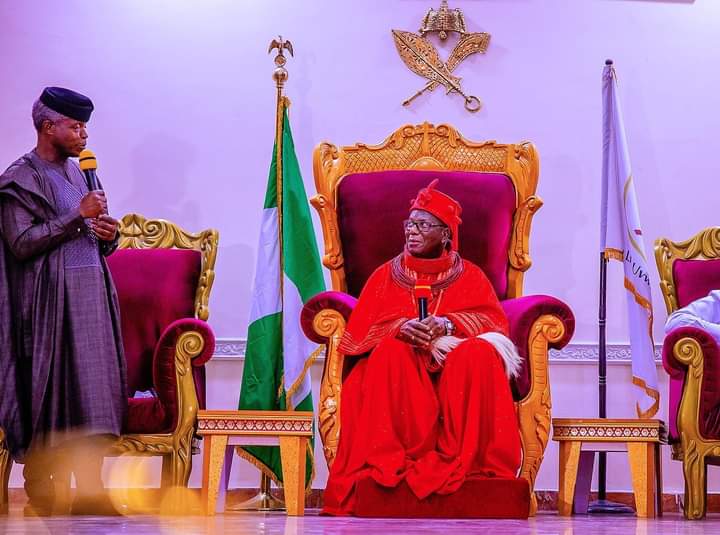 Vice President Prof Yemi Osinbajo has called for constitutional role for traditional rulers just as he commended the Ovie of Uvwie Kingdom; HRM Dr. Emmanuel Sideso for his role in Sustaining the peace in Uvwie.

Prof Osibanjo spoke when he paid a courtesy call on the Uvwie monarch in his palace in Effurun, Saturday, March 5, 2022.

The Vice President said that in view of the fact that traditional rulers were more in touch with the grassroots, there was need for the National Assembly to give them constitutional roles.

He prayed that with the level of politics gathering momentum, the National Assembly would be able to finish their constitutional duty and amend the constitution.

According to him, the President also wants some constitutional role for traditional ruler.

He commended the Uvwie Monarch for sustaining the peace in his kingdom, recalling the past youths restiveness.

Earlier in a welcome address, the Ovie of Uvwie Kingdom expressed surprise that despite their presentations to the National Assembly, the committee on constitutional review did not do anything or said a word on the need for constitutional role for traditional ruler.

He appealed to the executive to intervene and commended the federal government for the continuous support for the traditional institutions. He prayed for all politicians particularly the president and his Vice.

The Vice President who was in Delta state for the thanksgiving ceremony of Late Chief Patrick Ideh 95 year, one of those who fought for Nigeria independence and had been practicing law since 1961, was accompanied to the Uvwie palace by the NBA National Chairman, Olumide Akpata and the children of late Chief Patrick Ideh.