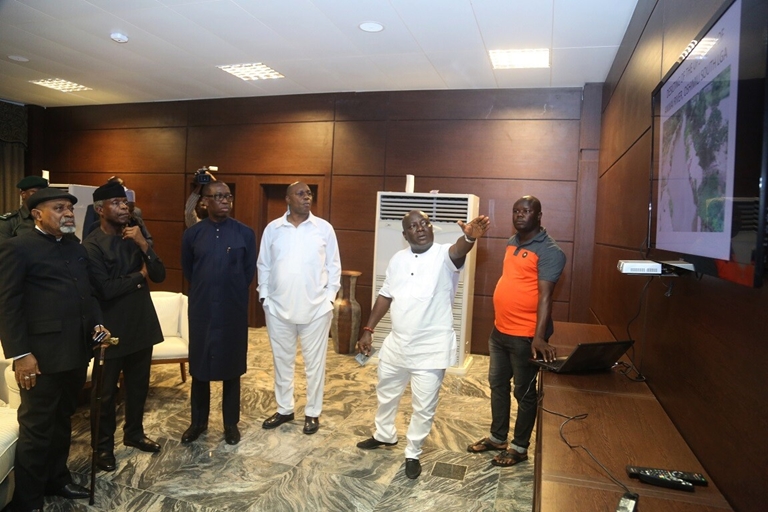 The Vice President expressed satisfaction with the proactive measures taken by Governor Okowa’s administration to reduce the effect of the flood on the people who were at the impacted communities.

Speaking at one of the holding camps set up for the displaced persons in Asaba, Oshimili South local government area of the state, Prof. Osinbajo said, “I am very touched seeing these persons who are affected by flood, I know how disruptive it is for those who are affected.”

“I thank the Governor of Delta State for setting up this holding camp, the facilities are adequate, the National Emergency Management Agency (NEMA) in the next 24 hours, will send relief materials to the state,” Prof. Osinbajo said, disclosing that following the effect of the flood, the Federal Government has designated Delta State as National Disaster Zone with three other states of the country.

Vice President of the Federal Republic of Nigeria, His Excellency, Prof. Yemi Osinbajo giving his Speech at an IDP Camp, during his visit to Delta State, over the Flooding Incidents in the State

The Vice President assured that the Federal Government will not only contribute to ensure the welfare of the flood victims while they are at the holding camps but, will work to properly resettle them in their communities after the flood must have receded.

Governor Okowa who accompanied the Vice President on visits to impacted communities, in a brief speech at the holding camp, thanked the Federal Government for their speedy response to the flood situation.

Delta State Governor, Senator Ifeanyi Okowa (right) giving his Speech at IDP Camp, during the Vice President visit to Delta State, Over the Flooding Incidents in the State

He observed that the state was bracing up for more impact of the flood as water in the affected states would pass through Delta State to empty into the Atlantic Ocean.

The governor thanked the displaced persons for embracing government programmes aimed at evacuating them to safety, stating, “though, we are aware that property, farm produce have been destroyed, our major concern is to save life, we are aware that the coming days may be more challenging as the flood is expected to rise, but, our people are prepared to ensure that Deltans are not left at the impacted communities; we are praying that the flood recedes fast for our people to return to their normal life.”