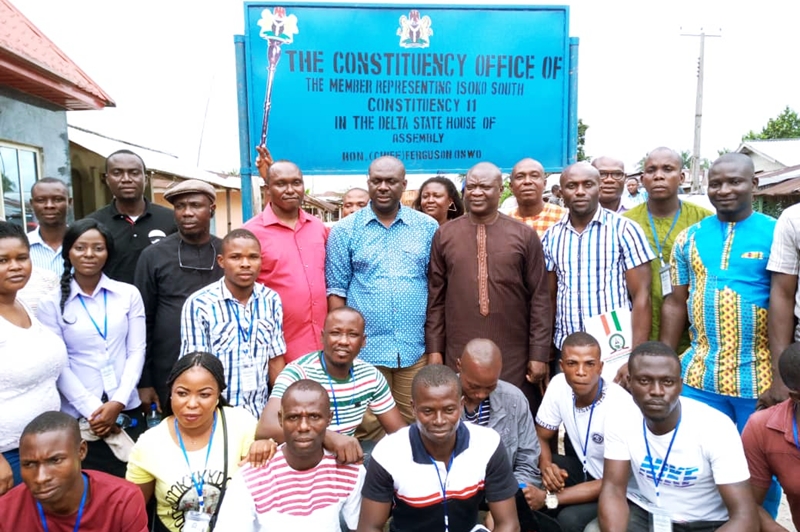 The Member Representing Isoko South II Constituency in the Delta State House of Assembly, Hon (Chief) Ferguson Onwo is to provide take off grant for the 36 constituents sent to Odi in Bayelsa State for skill acquisition training in Agriculture.

Hon Onwo announced this while receiving the trainees at his Constituency Office in Olomoro, Isoko South, upon completion of the two week training program by the 36 Constituents at the Bioresources Development Center, Odi, Bayelsa state.

The Lawmaker directed the trainees to carry out site feasibility studies within two weeks, disclosing that the 36 participants were drawn from the six wards that make up the Isoko South II Constituency.

Hon Onwo said they were trained in skills such as Snail Farming, Technology in Fish Production, Macro Propagation of Banana and Plantain, Mushroom Farming and Grass Cutter Rearing, under his “Okpobrisi Sustainable Development Scheme”.

The Lawmaker disclosed that the trainees were stream ‘A’ of the program, emphasizing that the skill acquisition training is aimed at reducing reliance on government jobs and to create employment for the teaming youths in the Constituency, in line with the policy direction of Dr Ifeanyi Okowa’s led administration.

Hon Ferguson Onwo addressing the Beneficiaries at his Constituency Office

Hon Onwo who is the Chairman, House Committee on Housing and Women Affairs, expressed satisfaction with the level of commitments and performance by the trainees and charged them to put to good use knowledge acquired in the course of the training.

The Lawmaker expressed optimism of an improvement in the agricultural sector in the state as the 36 trainees were empowered to commence operations in a very near future.

The Chairman, Isoko South local government council, Sir Itiako Ikpokpo, commended Hon. Ferguson Onwo for the laudable program, stressing that it will make the youths self-reliant as well as train others.

He charged the trainees to convert the skills into practice.

Others who spoke including the PDP chairman, Isoko South Mr. Raphael Odorewu and Mr. Collins Enigheno, also praised the efforts of the Isoko South II Lawmaker for making the youths in the Constituency self employed.

Responding on behalf of himself and others, Mr Alex Ukoro, expressed appreciation to Hon. Ferguson Onwo for having them trained in various fields in the agricultural sector.

He said they will take advantage of the program to establish themselves and boost the economic profile of the state.

It would be recalled that on September 5, 2019, Hon. Onwo approved the sponsorship of 36 constituents for training in skills acquisition program at the Bioresources Development Center, Odi, Bayelsa state.

The training center is expected to issue the trainees certificates of training to enhance their chances in course of establishing themselves.