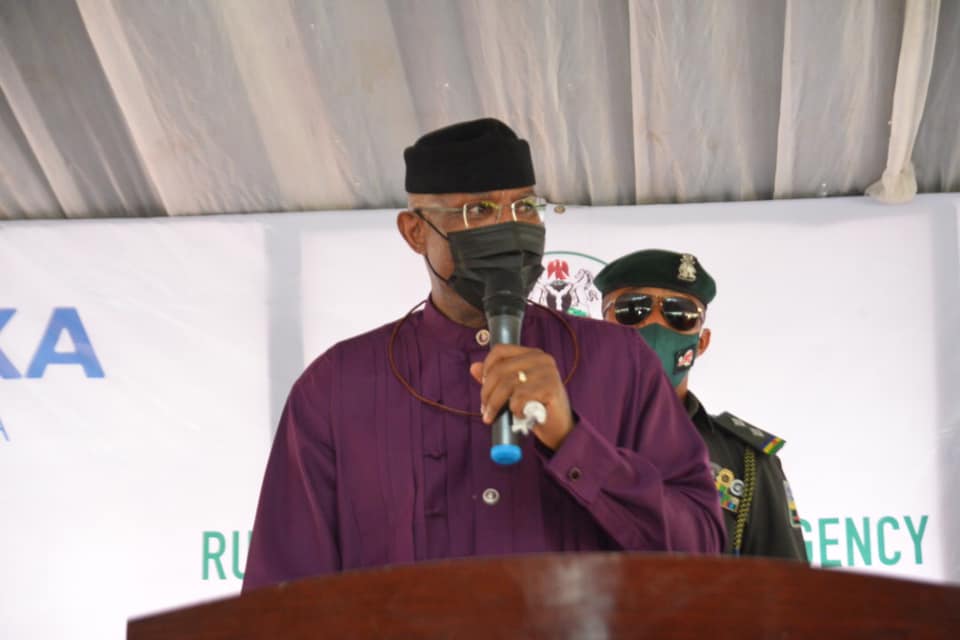 My attention has been drawn to a not-so-distinguished statement by the Senator Ovie Omo-Agege Campaign Organization, which was signed by failed presidential spokesman, Ima Niboro.

Typical of the APC and their penchant for lies and vile propaganda, the statement claimed that Delta State has received “over N770b” in receipts from the Federation Account without visible developments. It is pitiful, immature, and shameful when supposed leaders make unfounded and unguarded statements in their desperate bid to score cheap political points.

It is on record that Delta State, under the watch of Governor Ifeanyi Okowa, has reached new heights of fiscal discipline, infrastructural development, and human capital development.

Since May 29, 2015, the Delta State Government, has committed more than N600b to 798 road projects with a total length of 1,811.4km and 977.84km of drains. As a result of the administration’s proactive approach to infrastructural development, the hitherto neglected riverine communities have been enjoying a new lease of life. Asaba has shed its rustic look and is now wearing the status of a state capital because of the network of road projects constructed by the Okowa administration. In fact, it is reputed to be one of the fastest developing cities in Nigeria today. Major roads like the Maryam Babangida Road, Okpanam Road, and DLA Road, are now a beehive of business activities following their rehabilitation/reconstruction by the Okowa administration. Furthermore, with the Asaba Storm Water Drainage Project, residents of the capital city are no longer in panic whenever it rains.

The ultra-modern Prof. Chike Edozien Central Secretariat Complex, the Stephen Keshi Stadium, the Ogheye Floating Market, bridges connecting communities across the three senatorial districts and the Asaba Film Village and Leisure Park are some of the flagship physical infrastructure projects of this administration. Meanwhile, a six-story High Court Complex is nearing completion in Asaba while several markets have been completed across the three senatorial districts as part of the administration’s efforts to boost trade and commerce.

Following the downgrade of Asaba Airport to a Category 3 airport by the Nigerian Civil Aviation Authority in February 2015, the Okowa administration rehabilitated/reconstructed the runway, taxiway, and other ancillary works, completed the perimeter fence, and evacuated the hill beside the airport for the provision of obstacle free zone for the runway as demanded by the regulatory authority. The administration also completed the installation of the Instrument Landing System and the Airfield Ground Lighting System to enable the airport to handle night operations. The airport was fitted with a medical centre, while the previously unserviceable Automatic Weather Observation System and the Low-Level Wind Shear Alert System were repaired. Subsequently, the Asaba Airport was upgraded to Category 6, enabling it to handle large aircraft. The assurance of safety and the attractive nature of the route has continued to attract new airlines to the Asaba International Airport, which was concessioned to First Investment/Menzes Consortium for better management and profitability.

In the human capital development sector, the Okowa administration has trained and established over 120,000 Deltans in their choice enterprises through its various entrepreneurship development programmes, prompting the state to be ranked Best State in Human Capital Development in 2017 by the National Competitiveness Council of Nigeria. In 2020, Delta was adjudged the Second Least Poor State by the Nigerian Bureau of Statistics as evidence of the impacts of the job creation scheme of the Okowa administration.

Delta State became the first state to launch the Universal Health Coverage in 2016 with the establishment of the Delta State Contributory Health Commission. So far, 1, 130,884 persons have enrolled into the scheme while 510 healthcare facilities are accredited to provide service under it.

In the education sector, the Okowa administration established the Ministry of Technical Education. In line with the administration’s policy emphasis on skills acquisition, the moribund technical colleges in Iselle-Uku, Agbor, Ofagbe, Sapele, Utagba-Ogbe, and Ogor were rehabilitated and are now functional with state-of-the-art equipment. Ten new technical colleges in Asaba, Uvwie, Owa-Alero, Obiaruku, Orerokpe, Oghara, Irri, Omadinor, Kiagbodo, and Akugbene are currently at different stages of completion.

In consonance with the Sustainable Development Goals Number Four, the Universal Basic Education Act, and the new National Policy on Education, the Okowa administration has substantially improved access to primary and secondary education with the maintenance of existing schools and establishment of new ones. A total of 8, 617 classroom blocks and administrative buildings have been rehabilitated, renovated, or reconstructed since 2015. Meanwhile, the administration has established 62 new schools, 17 primary and 45 secondary.

These are just few highlights of the record-breaking achievements of the Okowa administration in building a Stronger Delta standing on the tripod of Prosperity, Peace, and Progress. Senator Omo-Agege needs to be reminded that it took money to get these projects done. It is either he is not seeing clearly, or he is suffering from amnesia for him not to have noticed all the infrastructural developments in the state, including those in Delta Central such as the Effurun Otor Owor Bridge, Ughelli, new Sapele Road, and the Agbarho Orherhe road, among many others.

Indeed, Omo-Agege’s criticism of “successive administrations” of the PDP in Delta State suggests the latter to be the case. Apparently, he has forgotten that he served in various capacities under the James Ibori administration as Special Assistant, Executive Assistant, Commissioner and Secretary to the State Government. Omo-Agege is best advised to concentrate on his doomed governorship ambition instead of trying to throw stones at Governor Okowa whose enviable place in history is already guaranteed.

THE ARENA: Magnus Onyibe and His Infantile Rambling
THE ARENA: Okowa, A Man With Governance Skills, Uncommon Party Builder And Loyalist – MSD
Advertisement