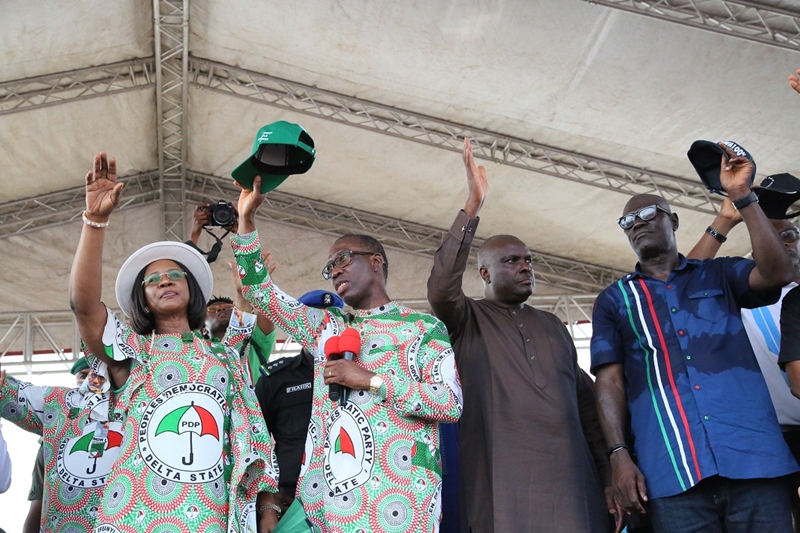 They spoke on Friday, February 1, 2019, at a well attended campaign rally of the PDP held at Owa-Oyibu, Ika North-East local government area of Delta State, home of the governor.

“Mr Governor (Governor Okowa), the Urhobos are solidly behind your second term, you have done very well,” Chief Ibori said.

They all observed that Governor Okowa has done very well to earn second term in office and based on the rotation principles of the PDP, Deltans will massively vote for the candidates of the party.

On his part, Governor Okowa expressed gratitude to Deltans for coming out in their large numbers at the campaign rallies, observing that the rotational principle has cemented the bond of unity in the state.

The governor who largely laced his speech in Ika language, stated, “I am happy with the crowd that I am seeing here today; God bless Ika nation, God bless Deltans for this show of solidarity; in our state, no one is talking about any other political party, it is all about the PDP. “

“I thank our leaders for the support, in every part of Delta State, we have no fear because, we have agreed on turn-by-turn, zoning has made us to be more patient, happier, more united and living in peace,” the governor said, asserting, “we have agreed as a people that we have done very well in the area of road construction, we have empowered our youths, assisted our women and now, I am more experienced, we have more money and the next four years will be better, we shall triple what we have done; cast your votes for all the candidates of the PDP and protect your votes because, it is democratic to do so.”

The governor’s speech received laud ovation from the thousands of Deltans across party lines who were at the rally to appreciate the good works of the governor in the area.

Deputy Governor, Burutu Otuaro thanked Deltans for resolving to zone political offices, assuring that Governor Okowa will do better in the next four years.

Before the grand finale of the campaign which was also, attended by traditional rulers, Agbor, Ika South local government area of Delta State had played host to the campaign team where Governor Okowa Thanked the people for their support which has led to the execution of projects in the area, assuring them that the next four years will be better.

2019 Election: Waive gets Party Flag; as Ogboru, Omo-Agege Drums Support for Him
Atiku’s Visit: Delta PDP and APC Clash Over Closure of Schools for Campaigns
Advertisement