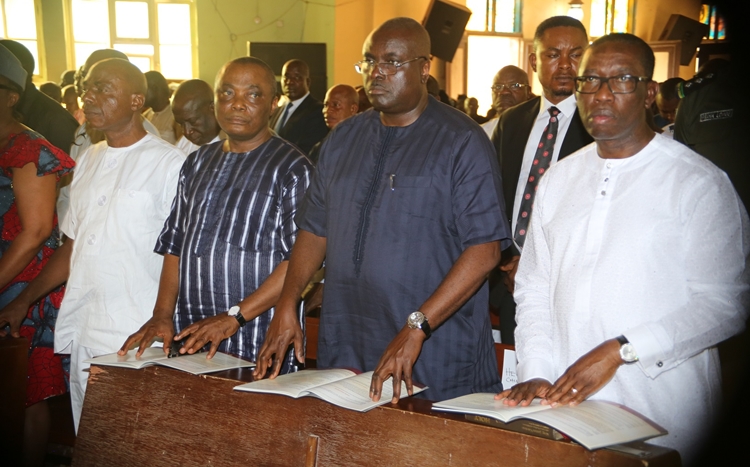 … As Remains of Senator Nwajei is Buried.

Governor Ifeanyi Okowa of Delta State has called on Nigerians to find time to be with God no matter their schedule stating that, it is very important that we create time to be in the presence of God, no matter how busy our schedule may be.

Okowa stated this during the funeral service of late Senator Francis Nwajei who was on Friday, June 8, 2018 interred in Asaba.

Former Governor of Delta State, Chief James Ibori, members of the National Assembly, political bigwigs in the state, an array of Priests, among others, attended the requiem Mass organised in honour of the deceased at St. Patrick’s Catholic Church, Asaba.

According to Governor Okowa, “It is only when you are alive that you can impact on the life of the people,” the Governor said, observing, “Senator Nwajei inspired and touched a lot of lives, he was a very warm character who always created time to be in the choir and in the presence of God.”

While describing the passage of Nwajei, one of the foremost politicians in the state who passed on at the age of 80 as a great loss, especially to the political class, Governor Okowa asserted, “we hope many politicians will live the kind of life Senator Nwajei lived, despite his political activities, he found time to be active in the choir and be with the Lord.”

He consoled the family of the deceased, urging them to take solace in the fact that their father had a lot of goodwill from those he touched their lives.

Earlier in a sermon, the Bishop of Issele-Uku Diocese of the Catholic Church, Most Rev. Michael Elue had said, such a day called for soul-searching by the living,, especially, those in authority in the country if they are committed to the development of the country or thinking solely about themselves and their families.

The Bishop who spoke through the Chancellor of the District, Very Rev. Fr. John Aduba decried “the senseless killings in the country,” observed that though, Nigeria is politically independent, it is economically in prison.

He called for a new Nigeria where those in authority will serve the people conscientiously and with the fear of God.

While extolling the sterling qualities of late Nwajei as a man of simplicity who had the fear of God, the Bishop observed, “for Christians, death is not something to be afraid of because, Jesus defeated death, to die is to live, we gain eternal home when we die in Christ.”

“No matter how beautiful where we live on earth, it is nothing compared to the mansion in the city of God for those who believe,” he emphasised.