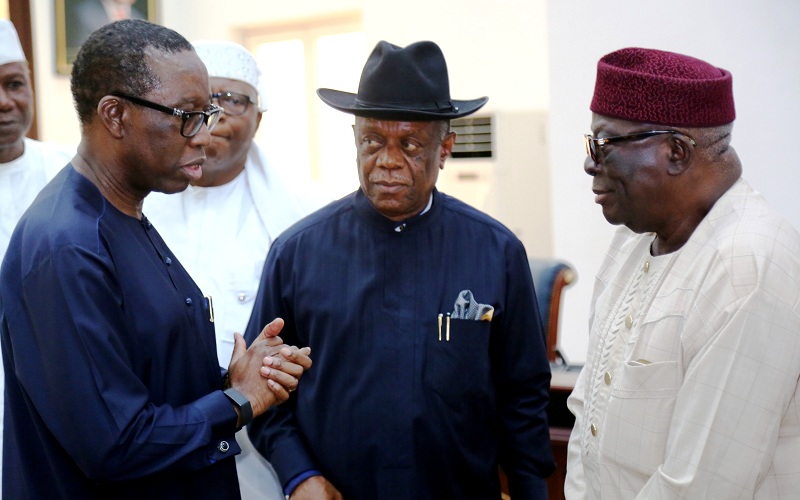 Delta Governor, Senator (Dr) Ifeanyi Okowa, on Friday, March 20, reiterated the need for proper restructuring of the country where the federating units could truly operate on the basis of equity, fairness and justice.

Okowa made the assertion while receiving leaders of South-South and Middle Belt Forum comprising Pan-Niger Delta Forum (PANDEF), Ohaneze Ndigbo, Afenifere and Middle Belt who visited him in Asaba.

“We should remind the nation and the Federal Government that there is need for restructuring,” he said and pointed out that the Constitution of the country was not given to the nation by Nigerians.

“The National Assembly had made attempt to amend it (the Constitution) but due to divergence of views, it has not been easy to amend it.

“Unfortunately, a whole lot of things are sacrificed on the altar of politics and political parties and this is a major problem in this country,” the governor stated.

He lauded the leaders and members of South-South and Middle Belt Forum for their sustained advocacy for restructuring and true federalism, saying “I belief that you people are doing a good work.

“You need the support of all and on my part, the little I can do, I will do to support you to the best of my ability.”

On the recent killing of 10 people in Uwheru in Ughelli North Local Government Area of the state by suspected herdsmen, Okowa said that the state government was making arrangement on how to assist the children and families of the deceased.

He assured that the state government would convey its condolences to the affected families and remarked that the farmers/herders crisis was a nationwide challenge.

The governor, however, expressed hope that a lasting solution would be proffered to the rather endemic problem.

Earlier, the leader of Afenifere, Chief Ayo Adebanjo, who spoke on behalf of the leader of the Forum, Chief Edwin Clark, told Okowa that they were in his office to lend support to the South-South Governors Forum’s initiative to float a regional security outfit, and to condole the state over the recent killings in Uwheru.

Adebanjo disclosed that the group wanted the country to be restructured, explaining that restructuring was not a new or political philosophy, stating that it (restructuring) had to do with true federalism.

According to him, anyone opposed to restructuring is an enemy to the country.

He commended Okowa for his passionate commitment towards the infrastructural growth and development of Delta, and urged him not to relent.