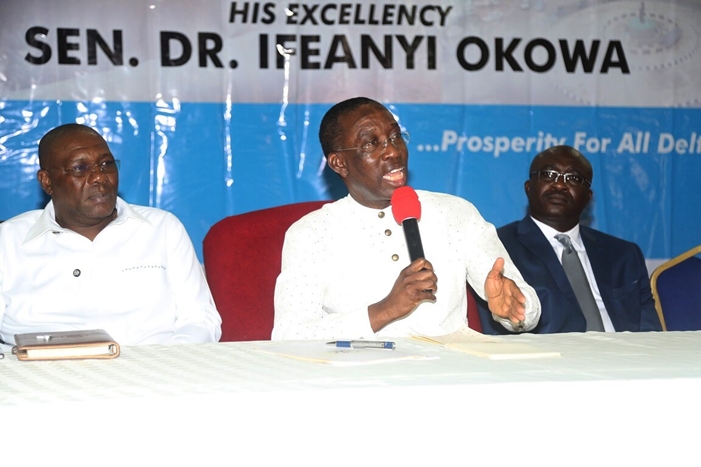 Delta State Governor, Senator Dr. Ifeanyi Okowa has urged the Chairman of the All Progressive Congress (APC), politicians and political parties to be cautious in the choice of words and be decent in their approach to issues as activities towards the 2019 general elections commences.

Reacting to questions about threats credited to Comrade Adams Oshiomhole that the APC will take over Delta State in 2019 at the 2018 second quarterly media briefing in Asaba on Wednesday, Governor Okowa stated that Nigerians should not be divided because of politics.

According to him, “I believe that Comrade Oshiomhole is playing politics just as Peoples Democratic Party (PDP) has a right to play politics as well as any other political party, the only advise I have for all politicians both in PDP and APC is that there must be decorum, we must be cautious in the language that we use as they should be decent and I believe that what politicians need to do is to address issues and when issues are addressed the people will make their choice.”

“As politicians wherever you are, try to be civil in your approach to politics because that is the way it ought to be,” the governor said.

He used the occasion to throw light on what transpired when PDP presidential aspirant and former Vice President, Alhaji Atiku Abubakar paid a consultation visit to Delta State.

“If you followed us properly when he (Alhaji Abubakar) addressed Deltans, it was obvious that he made a lot of statements which did interest our people and he did say that he is a friend of the state and if his programmes as he says continues to interest the people, I will not be able to hold back the hands of the people; I am not going to force any Deltan to vote the way I think, Deltans who will be delegates in the convention will be allowed to exercise their discretion to vote, I am not the kind of person who insists on how a person should vote, so, if on his programmes he talked about restructuring and the people are excited and they want to follow him, they have that right, so, I made my statement and it was clear and cautious and when Sule Lamido came, he spoke so well and he is also a man I respect. He also has his followers in the state, he was well received and I made my comments so, it is my hope that all the presidential aspirants in the PDP will start to talk with each other because not all of them will get into the final stage,” he clarified.

The governor who was calm throughout the media parlay, continued, “as I spoke when Alhaji Abubakar came, I was very cautious and that is because, I do not want as a governor to say that this is the man I am supporting, I do not want to directly support any candidate and people will be given the room to make their choice; the will of the people will be allowed to prevail and not my will.”

More than 200 journalists attended the media chat which was also, attended by the Deputy Governor of Delta State, Deacon Burutu Otuaro, and some members of the state executive council.