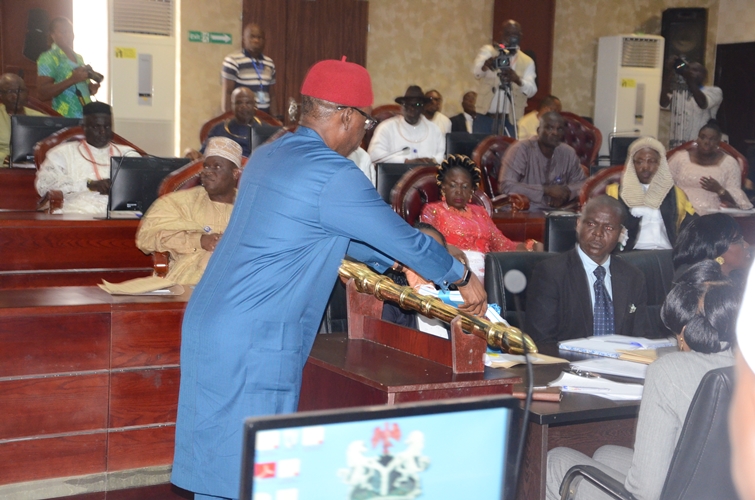 Governor Ifeanyi Okowa on Thursday presented a budget proposal of N270.91billion for 2017 to the Delta State House of Assembly. Okowa said N151.909 billion of the amount was for Recurrent Expenditure, while Capital Expenditure stood at N119.001 billion.

He said the 2016 budget christened: “Budget of Fiscal Consolidation and Continued Progress’’ showed a marginal increase of N2.731 billion when compared to the 2016 approved budget of N268.169 billion. Okowa said the country could not reap the benefit of the oil benchmark $38 per barrel because the nation could not sustain the 2.2mbpd crude oil production target as a result the activities of militants in the Niger Delta which has also continued to impact negatively on the state’s Internally Generated Revenue.

“It has therefore become imperative that to explore other sources and we are currently renewing rates and charges and also harmonizing the various taxes in the state.” He said: “As a result, we have proposed to earn N70.165 billion as revenue receipts from Internally Generated Revenue (IGR) in 2017. “The sum of N148.9 billion is expected from Statutory Allocation from the Federation Account in the 2017 fiscal year. “The proposal for capital receipts for 2017 have been scaled down from N44.29 billion in the 2016 budget to N41.29 billion in 2017.’’ Okowa said that expected revenue from Value Added Tax (VAT) was N10.515 billion, while other capital receipts would be N42.1 billion.

The governor said that the Delta State Oil Producing Area Development Commission (DESOPADEC) had the lion share of N28 billion of the budget proposal. The environmental sector had N24.38 billion followed by the economic sector with N29.44 billion. Okowa said N1.3 billion had been proposed in the budget for job creation, agricultural support package and wealth creation scheme.

The Governor also said that the Central Hospital Asaba is nearing completion while the Contributory Health Insurance Scheme will commence in January 2017. Okowa assured that his administration would continue to observe the basic principles of prudent management of public finances.

The Speaker of the Assembly, Rt. Hon. Monday Igbuya, assured the governor that the budget would be carefully scrutinised to meet the expectations of the people of the state.