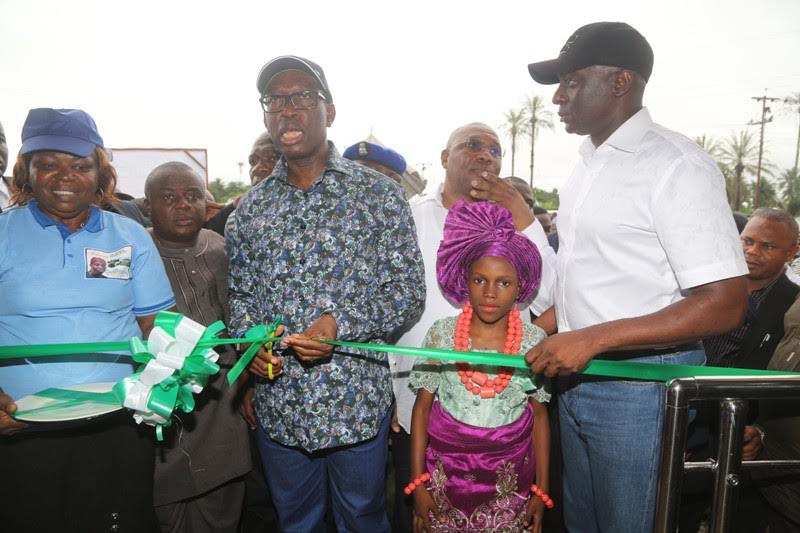 As part of activities lined up to celebrate the second year anniversary of his administration, Governor Ifeanyi Okowa Tuesday commissioned and inspected projects in Sapele and Ethiope West local Governments.

The Governor who was accompanied by his Deputy, Barr. Kingsley Otuaro, the Speaker of the Delta State House of Assembly, Rt. Hon. Sheriff Oborevwori and the Deputy Speaker, Rt. Hon. Friday Osanebi, also, inspected ongoing projects in the Local Governments.

Commissioning the upgraded facilities at Sapele Technical College, the Delta State Governor advocated for the award of contracts to technical colleges in the country to encourage them to do more.

Buttressing the need to patronize technical colleges, Governor Okowa stated that it was important for Nigerians, especially, the youths to be equipped with technical skills which will save the country from capital flights and also, make the youths to be self employed and become employers of labour.

The Governor expressed satisfaction that the Technical College has befitting structures, workshops that are well equipped and asphalted roads, noting that the technical colleges in the state are capable of competing with the best in the country.

In Ethiope West, The Ovie of Oghara, HRM Oyibo Eshemitan, Orefe  II, joined Governor Okowa to commission the expanded Oghara Junction to Otefe road where the Governor also flagged off the construction of Ogwefe/Ugbenu road and inspected the Jesse Access Road Dualisation Project.

During his courtesy visit to the Palace of the Ovie of Oghara, Governor Okowa assured the people that his administration would continue to do more in the delivery of democratic dividends and thanked Deltans for their support.

HRM Oyibo Eshemitan, Orefe  II, applauded the developmental stride of Governor Okowa and urged him not to be deterred in meeting with the yearnings of Deltans.

Policemen to be deployed to their Communities of Origin – IGP
Senate bars NNPC, others from spending money
Advertisement