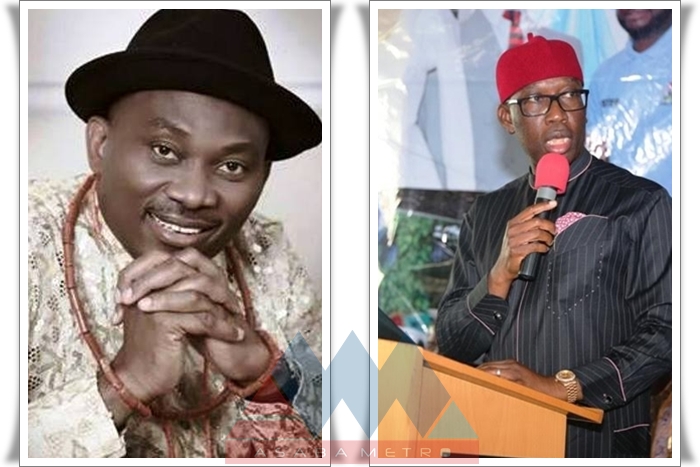 The immediate past lawmaker who represented Aniocha/Oshimili Federal Constituency at the National Assembly, Rt. Hon. Ndudi Godwin Elumelu has lauded the achievements of Governor Ifeanyi Okowa in revamping the economy of the Delta State.

Elumelu who keenly engaged Okowa for the Peoples Democratic Party (PDP) Gubernatorial ticket in 2015, expressed his satisfaction with the present Governor at a media interaction with members of the Delta State Online Publishers Forum (DOPF) at his country home, Onicha-Uku in Aniocha North Local Government Area. He stressed that, Okowa has done reasonably well to kind of actualize what he had hoped for.

In his words, “I have been so impressed with Okowa. One for the situation that he found himself. I don’t know of about other aspirants but I knew where we where in terms of balances. I knew as at that time that we were contesting, I was seeing about 800 Billion deficit and I don’t know what himself knew.

“The difference was that, I had structured mine on a way that I would have handled it without recourse to affecting or disrupting activities by going to the secondary market but because of what he found out, he has been able to swim under and inside it and he seems to be coming out strong. So for that, I give him kudos.

While expressing his confidence for Okowa and PDP led administration in the state, the eloquent and ebullient politician, who is the younger brother to Billionaire and Chairman of UBA, Mr. Tony Elumelu, noted that his “SHINE DELTA” mantra for Deltans has so far been evident in the achievements of Governor Okowa.

Elumelu however disclosed that one thing that he had wanted for Deltans, is yet to be achieved and hoped that one day it will.

“On what I wanted to do for Deltans, I had a vision to reduce the traffic of commuters within two years by completing a Rail Road from Asaba to Oleh, from Oleh to Warri, from Warri to Agbor. In effect, what we had wanted to do was that, whether you are a farmer… we will have three coaches; First Class, Business and Economy. Economy will be both for Farmers, Students and others, the other one will be for workers who will always buy pass on monthly basis. It was going to be Built, Operate and Transfer.

“So in effect, Delta State Government was not going to touch one Naira in it, we had met with Hitachi and they had agreed to come and do it for us just like what they did in Dubai because I went and saw it and told them about the viability of it. Also, Ughelli Transcorp Power Plant, which is of course my brother’s own, had promised to give us 20Mega Watts of electricity in such a way that the rail line will never be disrupted.

“So that is the only area that I probably think my dream hasn’t come true but every other thing, Okowa has done excellently well.”