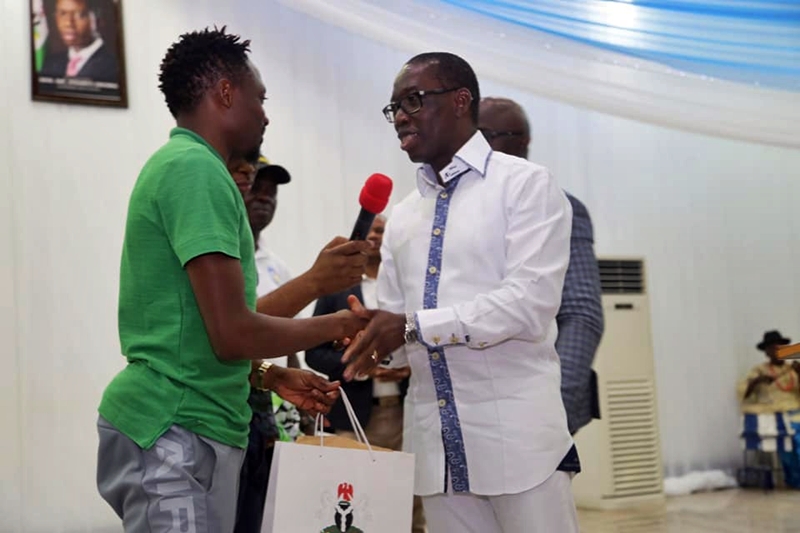 Ahmed Musa Receiving the $50, 000 Pledge by Governor Okowa To The Super Eagles

In the football encounter which took place at the weekend in Johannesburg, South Africa, the match ended 1-1 with the Super Eagles qualifying for the championship billed to hold in Cameroon in 2019.

At a state banquet yesterday held in honour of the Super Eagles at Government House, Asaba, Governor Okowa disclosed that though, the match ended 1-1, he saw the Super Eagles scoring more than one goal.

“As a state government, we did made a promise that we will give $25, 000 dollars per goal in the AFCON qualifying match in South Africa; in my mind, I know we scored two goals, not one goal, because the second goal was wrongly disallowed, so, we will fulfil our promise with what we saw, not with what was announced by the referee,” the governor said.

Governor Okowa disclosed that the camping of the Super Eagles in Asaba was a blessing in several ways. The Super Eagles trained at the Stephen Keshi Stadium, Asaba from where they departed through the Asaba International Airport to South Africa. Shortly before their departure, Governor Okowa promised to reward them with the sum of $25, 000 for every goal scored which motivated the Super Eagles to qualify for the continental championship.

According to him, “we are very happy that you left for South Africa from Asaba because you enabled us to witness the first international flight from the Asaba International Airport; I am truly excited this evening that we are hosting our dear Super Eagles as a state government and the Ugandan Team that earlier played with the Super Eagles at the Stephen Keshi Stadium, we truly enjoyed ourselves because the two teams played good football.”

“It was good to host the Super Eagles, they have been with us for some days now and I believe that the people, Deltans and Nigerians in general are excited; though, they drew the match with the Cranes of Uganda, both team played good game and it was gladdenjng to know that both team have also, qualified for the African Cup of Nations,” he said, disclosing that the coming of the Super Eagles to Asaba greatly gave a boost to socio-economic life of Deltans.

He stated that his administration will continue to invest in the development of sports and sporting activities, noting that Principal’s Cup and the Headmaster’s Cup football championship were designed to encourage the development of football in secondary and primary schools in the state.

Governor Okowa congratulated the Super Eagles for qualifying for AFCON, assuring that his administration would continue to support the Pinnick Amaju led Nigeria Football Federation (NFF) to succeed.

President of NFF, Mr Amaju had in his speech, thanked Governor Okowa for his support to the Super Eagles, stating that the team had qualified for the 2019 edition of AFCON.

“We should thank Governor Okowa for not just chesting out for NFF but, giving us everything we need to qualify for AFCON, I am a very proud Deltan; we have come to Delta, we have seen and we can testify that things are okay; Your Excellency, we want to thank you; in March, 2019, the Super Eagles will come back to Delta State to play with another international team, please, continue to support the Super Eagles.”

“We will love to come back here again and on behalf of my team mates, we say thank you,” he said expressing confidence that Governor Okowa will be re-elected in 2019 to enable him join the Super Eagles as Special Guest of Honour at AFCON in Cameroon.

High point of the event which saw renowned Nigerian born musicians and comedians performing was the presentation of a Super Eagles jersey signed by all the members of the team to Governor Okowa. The governor in turn, presented the money he promised the team for every goal scored to the Captain of the Super Eagles, Ahmed Musa.

The Cranes of Uganda that earlier held the Super Eagles to a goalless draw at the Stephen Keshi Stadium attended the dinner.