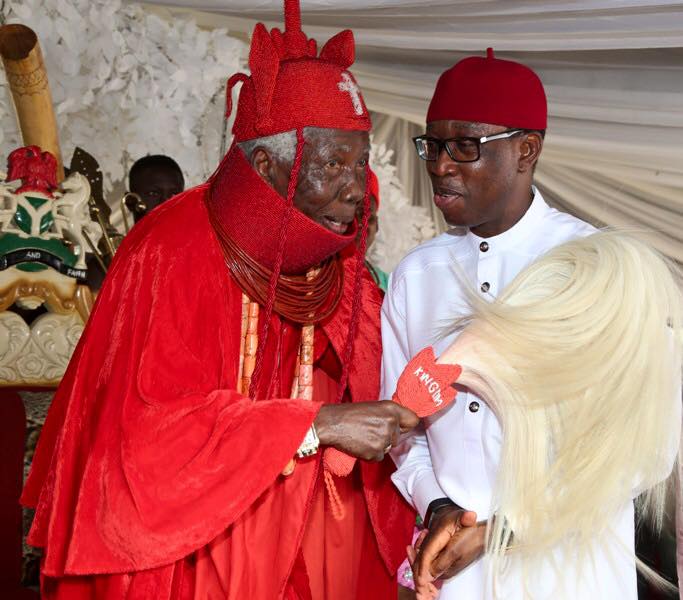 Delta State Governor, Senator Dr Ifeanyi Okowa has called on Deltans to engage in actions that will strengthen unity and peaceful co-existence of the people.

The governor made the call on Friday, January 20, at the 100th birthday celebration of HRM Ovie Richard Ogbon, Ogoni-Oghoro 1, the Ohworode of Olomu Kingdom, Ughelli South local government area of Delta State.

According to Governor Okowa, “we should continue to realize that by partnering together, united, we will be able to develop our state and though, there is recession, we will continue to make progress as a state.”

He called for continual protection of oil facilities, stating, “what belongs to government, belongs to the people.”

The governor used the occasion once again to apologize to traditional rulers of the Urhobo ethnic nationality for whatever misunderstanding that took place during the visit of Vice President Yemi Osibanjo to the state recently.

“I use this occasion to apologise once again to our traditional rulers for what happened during the visit of the Vice President to our state, it was most unfortunate that it happened, no matter what, forgive the state and the nation,” the governor said, while congratulating the Ogoni-Oghoro 1 for attaining 100 years of age.

He said, “this is a day of joy in Delta State and in our country, Nigeria; I congratulate all of you for this special blessing which can only come from God – for a King who have a lot of burden to carry to live up to hundred years is very rare to see and I believe that every day of your (the celebrant) life, you will continue to press on for the ultimate crown, you must work consistently to ensure that you get the crown of glory on the last day; you are a role model to a lot people, including me.”

Acting President Yemi Osibanjo in a goodwill message read by Senator Babafemi Ojudu, special adviser to President Buhari on Political Matters congratulated the King on his birthday and thanked him for his contributions to the development of his kingdom and the country.

The celebrant at the occasion thanked God for keeping him, saying, “God has been so kind for keeping me alive today.”

The Anglican Bishop of Ughelli Diocese, Rt. Rev. Cyril Odutemi in a sermon, urged traditional rulers and those in positions of authority to be fair and just while carting out their functions, reiterating, “give sound judgement, rebuke sinners and make the fatherless to know that they have a father in you.”

People of all walks of life attended the birthday ceremony.