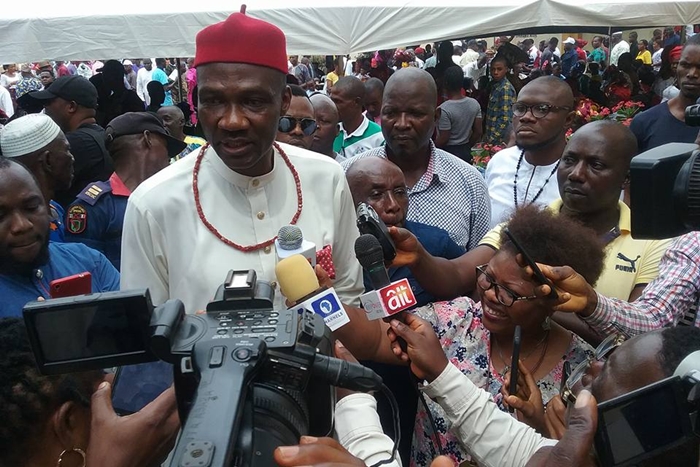 Immediate past National Vice Chairman of the Peoples Democratic Party (PDP),  Hon. Chief Dr Cairo Ojougboh has lashed out at the trio of Governor Ifeanyi Okowa, Nyesom Wike and Ayodele Fayose of Delta, Rivers and Ekiti State respectively for instituting a reign of impunity in the PDP.

Speaking at the expanded Delta State Caucus Meeting of the PDP, Ojougboh stated that the above Governors have taken the party away from the people at the grassroots.

In his words,  “After the unfortunate Supreme Court judgment, a Committee for the National Convention was set up with Raymond Dokpesi as the Chairman. Our Governor (Okowa) rejected Dokpesi on the basis that he spent money for the case at the Supreme Court. They succeeded and they changed him. If Sheriff was the chairman of the party, will the governor say that he does not want the man already nominated?”

Speaking on the Anambra state governorship primary of the PDP,  Ojougboh remarked thus, “Professor Jerry Gana was appointed to be the chairman of the 3 man delegate election committee. After that, two governors, Wike and Fayose woke up and said that they were the owners of the party, so they went to Anambra bungled the whole process and handed the congress to former governor Peter Obi who simply drew up a list of his people as delegates. All the party members were disenfranchised.”

Ojougboh also rapped Governor Okowa for turning the PDP and the state government into a family business while neglecting the people working with him and the generality of Deltans.

At the end of the meeting, Dr Ojougboh a founding member of the PDP and former member of the House of Representatives, proclaimed the dissolution of the entire State, Local Government and Ward Executive of the PDP. He thereafter led the hitherto PDP executives and a mammoth crowd of supporters to destroy their PDP membership cards and renounce their membership of the PDP. They were received into the APC by the National Vice Chairman of the APC, Ndufam Hilliard Eta, the Minister of Petroleum Resources Mr Ibe Kackikwu, State Chairman of the APC Prophet Jones Erue amongst several other dignitaries.

A one time governorship candidate of the APC, Olorogun Oghenetega Emerhor described the defection of Dr Ojougboh as the collapse of the PDP in Delta State noting that Ojougboh as a politician is a great asset to the APC in the quest to enthrone a responsive government in Delta State.