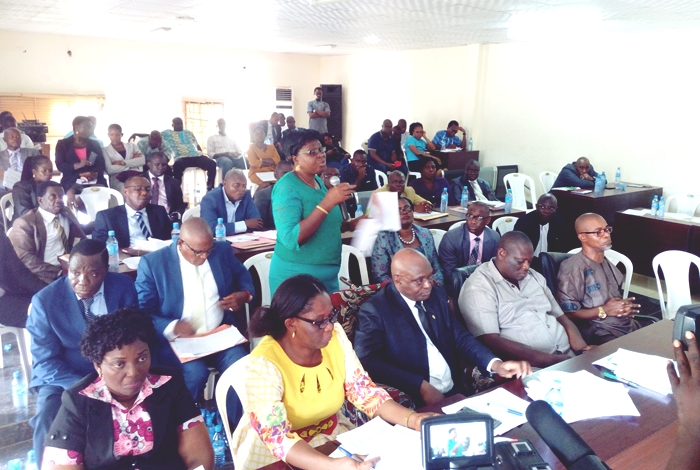 The Rector, Delta State Polytechnic Ogwashi Uku, Prof. Mrs. Stella Chiemeke has revealed that environmental problem is the biggest challenge facing the institution noting that the basic needs of the students- water, light and accommodation is nonexistent in the learning community.

Prof Chiemeke disclosed these challenges today before the House Committee on Education of the Delta State House of Assembly at the ongoing 2018 budget defence, stating that the Polytechnic is highly affected by the geographical siting which has led to the lack of primary needs in the Polytechnic such as water, light erosion amongst others.

She stated that series of borehole water projects had be installed but they either collapsed or stopped supplying water after sometime and that only industrial borehole can tackle the challenge of water supply in the institution.

Responding to the revelation, Hon. Angela Nwaka, member representing Aniocha South State Constituency who doubles as the Chairman, House committee on Education said that immediate actions will be put in place to tackle the challenge of water supply while modalities to power the Aniocha South Local Government Area above average is at its peak of delivery.

Speaking at the budget defence by the Ministry of Higher Education, Hon. Nwaka advised that people who don’t meet admission requirements should be channeled towards skills acquisition. She also advised that charges on students should be moderated because if they are too much then it will no longer be affordable by average Deltans.

The committee chairman expressed a loud disappointment with the parastatals under the Ministry for Higher Education for using minute defects in the laws establishing them to wholly consume the Internally Generated Revenue (IGR) from their institutions without recourse to the House of Assembly. “It is awful whereby the Ministry relies on the State Government to take care of staff salaries while the Ministry through the institutions generate and spends income at will without generating any income back to the government”, Nwaka lamented.

Meanwhile the Honorable Commissioner for Higher Education, Engr. Jude Sinebe has disclosed before the House committee on Education that there is a provision for first class scholarship in the 2018 budget but only for those within the shores of the country.

While appealing for a marginal increase in tuition fees across the higher institutions in state, Sinebe noted that Delta State is the least fees paying State in the country, arguing that the ministry needs more government funding, libraries in each constituency and adequate staffing to meet the educational requisite of higher institutions in the State.

Speaking further Hon Sinebe stated that internally generated revenue were used for course accreditation, ICT consultants amongst others which were either approved by the governing council or the school management adding that capital projects were not funded by the state government but by NDDC, TETFUND amongst others.

The Ministry of Higher Education ranks among the lowest performing Ministries in the State, with a poor 13% budget performance for year 2017.