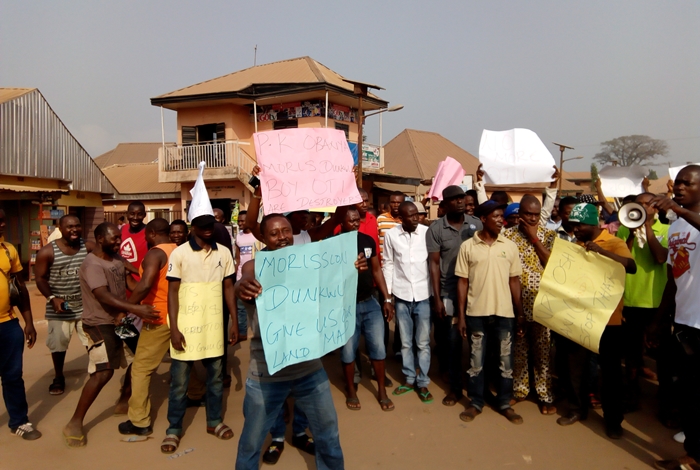 Hundreds of Youths from Obodogwugwu Community in Okpanam, Oshimili North Local Government Area of Delta State, have unanimously kicked against a sit tight land committee which has been accused of embezzling the common wealth of the community for the past 16 years.

The aggrieved youths who converged under the umbrella of Concerned and Patriotic Citizens of Obodogwugwu Community, Okpanam, having perceived that their future is being mortgaged by a selected few in the community, mobilized in their numbers and took to the streets to express their displeasure in a civil protest against the land committee which has held sway since 2002.

Marching across the major roads on Friday, January 19, 2018 with the presence of Security personnel, the youths visited the leaders of Okpanam community and Obodogwugwu quarter where they lodged their petition and prayers to them.

Obodogwugwu Youths at the Palace of the Ugoani of Okpanam, HRM Michael Mbanefo Ogbolu

The petition as obtained read in part; “We the Youths of Obodogwugwu Community in Okpanam after a proactive deliberation and wide consultations on the 16th of January, 2018 at the Community Hall, a critical analysis of the events and counter events of the community was x-rayed in which it was discovered that the future of the youths in Obodogwugwu is in danger and if action is not taken to tame the activities of Obodogwugwu cabals now since year 2002, we will therefore have no option rather than to borrow leaf from the people of Zimbabwe.”

“Our resources are being squandered in Police Stations and several Courts of Law in order to intimidate whoever deems it fit to ask questions about our community resources.”

Obodogwugwu Youths at the Palace of the Omu of Okpanam, HRM Obi Dr. Martha Dunkwu

Going forward, they prayed that;
1. Barr. Morrison Dunkwu should handover all Obodogwugwu documents in his possession at the general meetings of the community, including the community cheque book.
2. All the working committees should stand dissolved.
3. All the layout maps of the community in their possession should be submitted at the general meetings of the community.
4. All contractors that are engaged should make their contract documents available with their areas of engagements listed.
5. Allocated 20 plots of land to each village in Obodogwugwu Community should be indicated in the contractor’s layout maps.
6. And with immediate effect that Mr. Ikechukwu Osordi a.k.a Boy Oti led Land Committee should cease from handling any land dealings and negotiations on behalf of the Obodogwugwu Community.

These demands were conveyed in a letter and submitted at the residence of the Ugoani of Okpanam, HRM Michael Mbanefo Ogbolu, Omu of Okpanam, HRM Obi Dr. Martha Dunkwu, Okpanam National Youth President, Comrade Friday Okonkwo, Asagba of Okpanam, Chief George A. Ozili and Diokpa-Isi of Obodogwugwu and Diokpa Engr. N. Oluonye where they took their grievances to.