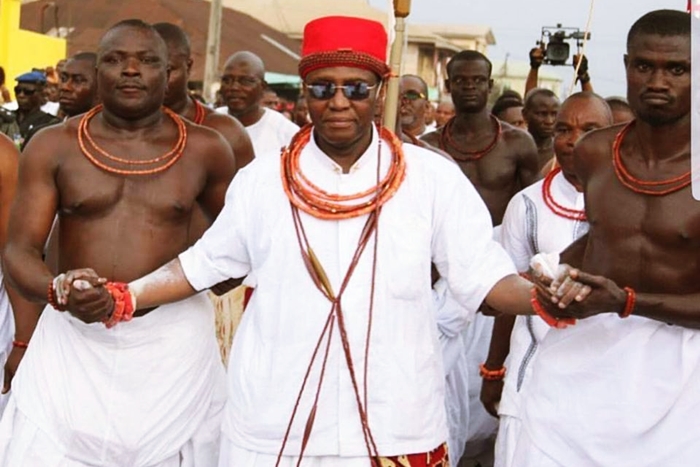 Omo N’Oba N’Edo Uku Akpolokpolo, Ewuare II, Oba of Benin says he did not mandate anybody to hold meetings with the Ijaws on behalf of the Palace.

The Benin Monarch made the clarification when members of Great Benin Vanguard led by Prof. Ovenseri Abueku paid him a courtesy visit in the Palace.

His Royal Majesty said he was surprised to hear in the Media that Colonel Paul Ogbebor (retired) held meeting with the Ijaws, claiming it was at the instance of the Oba of Benin.

The Omo N’Oba told members of the Great Benin Vanguard that they should avoid confrontation and violence saying that the Palace always sue for peace and harmony in Benin Kingdom.

His Royal Majesty advised them to try to do things that will uplift the image of the Kingdom.

The Oba of Benin said the Palace will continue to offer prayers for the peace and tranquility of the Kingdom.

His Royal Majesty, Ewuare II however called on members of the Great Benin Vanguard to consider how they would establish the teaching of Edo history in private schools as well as language programmes on Radio and Television to promote Benin Language.

Earlier, the Chairman of the Great Benin Vanguard, Prof. Ovenseri Abueku said they were in the Palace to introduce the group to the Monarch and solicit for Royal blessings to enable them succeed in their set goals.

Prof. Abueku informed the Omo N’Oba that the group was formed in response to the challenge and offensive actions and publications by the Ijaws in Edo State, coupled with their call for the creation of a local government area for them in Benin Kingdom.

He said they have visited the State Governor on the matter and have also published articles in various media on the need to secure Benin land from all non-indigenous Binis that are attempting to encroach on Edo South Senatorial Constituency made up of indigenous Benin people.

The Great Benin Vanguard canvassed the need for Benin people to endeavor to live in their respective villages, in order to prevent the rural areas from being taken over by non-indigenes.

The Oba of Benin also received Hon. (Mrs.) Elizabeth Uyinmwen Ativie who was in the Palace with members of her family, political associates and friends to thank the Omo N’Oba for the fatherly role he played during her trying period at the Edo State House of Assembly.

Hon. Ativie commended His Royal Majesty for the prevailing peace, progress and development in the Kingdom due to the abolishing of Community Development Association (CDA).

She also lauded the Oba for his pronouncement on human trafficking which has gone a long way in restoring the dignity of Edo women.

Hon. Ativie noted that since Ewuare II ascended the throne, opportunity have been given to women to be heard under the aegis of the open mediation at the Palace initiated by His Royal Majesty.

She used the opportunity to inform the Royal Father about her achievements as a law maker representing Uhunmwode Constituency in the Edo State House of Assembly to include, provision of free medical treatment, construction of primary school buildings, provision of water borehole, award of scholarship to indigent students, among others.

Hon. Ativie solicited for Royal blessings to enable her succeed in her future endeavour.

The Oba of Benin congratulated Hon. Ativie for her successes and advised her to remain steadfast and pray that God and the Ancestors should continue to grant her the wisdom and the ability that she requires.

The Omo N’Oba drew her attention to the poor level of development of Uhunmwode and enjoined her to support the Council Chairman to succeed in bringing development to the area.