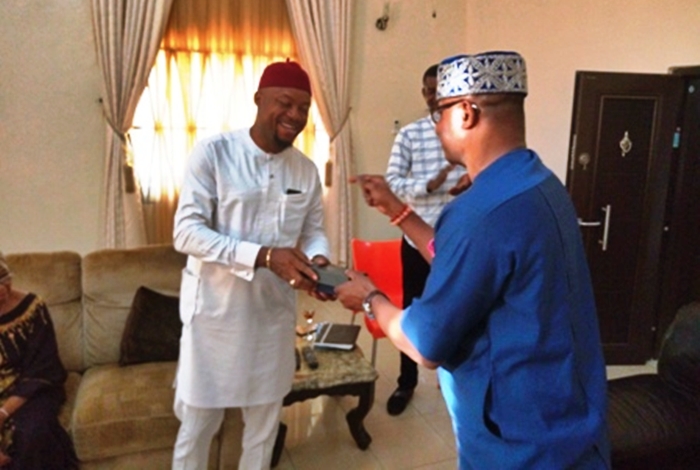 He made this assertion when he paid a visit to the Honourable Member representing Aniocha North Constituency at his official residence in Asaba, to congratulate him on his landslide victory at the just concluded House of Assembly election and for fighting a good fight prior, during and after the election.

Chief Ugbolue, one of the few brains behind the concept and management of the Amnesty Programme in the country, stated that it has become pertinent for him to make the visit, maintaining that Nwaobi occupies a critical office through which every community in the Constituency is democratically attended to by the State.

According to him, “I have come to congratulate you my brother, on your victory.

“I have also come to tell you not to forget Issele-Mkpitime in your agenda for the next dispensation. We are very proud of you in Issele-Mkpitime for understanding our pain and giving us a major road that is so dear to us.

“However, we are appealing for internal roads and water specifically. Do it for us and your path with Issele-Mkpitime will become like that of the river that never runs dry.

“Honourable, you are a man of your words, we trust you and believe in what you can do. You are a good man who was brought up decently. You are also a lion in fights; that is why God led you through all the journeys against the indecent people with larger number in Aniocha North.

“One thing I must advise you my brother, you have begun on a very good and remarkable note, you must keep it up. Please continue to do that with paramount interest for the people and God will always be there for you”, Chief Ugbolue said.

Speaking further, Chief Henry Nonso Ugbolue stated that as a lion and great fighter, he would have come with a sword to present to Hon. Nwaobi as a mark of respect.

He however maintained that the world has evolved and that the pen has become mightier than the sword thus he had to travel all the way to America to purchase special and symbolic pens for both Honorable Nwaobi and Governor Ifeanyi Okowa.

He therefore brought out a well packaged pen and presented to Hon. Emeka Nwaobi, asking him to always use it when he wants to write Issele-Mkpitime, so as not to forget Issele-Mkpitime in his programmes and projects.

He also presented another pen, asking Hon. Nwaobi to help transmit it to His Excellency Senator Dr. Ifeanyi Okowa, the Governor of Delta State; also as a mark of honour for making Deltans proud with his landslide victory.

Basking in the joy of Chief Henry Ugbolue’s visit, Hon. Nwaobi introduced his parents to the man whom he called a true brother.

Nwaobi who recounted the enormous support of Chief Ugbolue to him, told his visiting parents from America that he had never seen a man like this. He narrated how he (Ugbolue) supported him financially in the first election, while also mobilizing his people of Issele-Mkpitime for him during that election.

He said Ugbolue did not stop there, but always making monetary contributions to any of his empowerment programmes.

“In this very 2019 election too, he not only gave me money, he also was around for the election and helped to supervise my election in Ward 5 Issele-Mkpitime. In fact, he ensured that those who came to snatch ballot boxes never succeeded.

“I am proud of him. He has shown me love and above all, making our relationship go beyond friendship; we are now brothers. And in all of this, he is not asking for anything personal. I see him as a progressive constituent to work with in our resolve to move Aniocha North to the next positive level”, Nwaobi affirmed.

Speaking on the request made by Chief Ugbolue, the amiable representative assured him that he would immediately send water experts to Issele-Mkpitime to do a general survey on how water project can be sited in the town.

Moreover, the elated father of the Honourable Member, who previously celebrated his 86 birthday anniversary, prayed for Chief Ugbolue and blessed the friendship that has matured into brotherhood between him and his son.