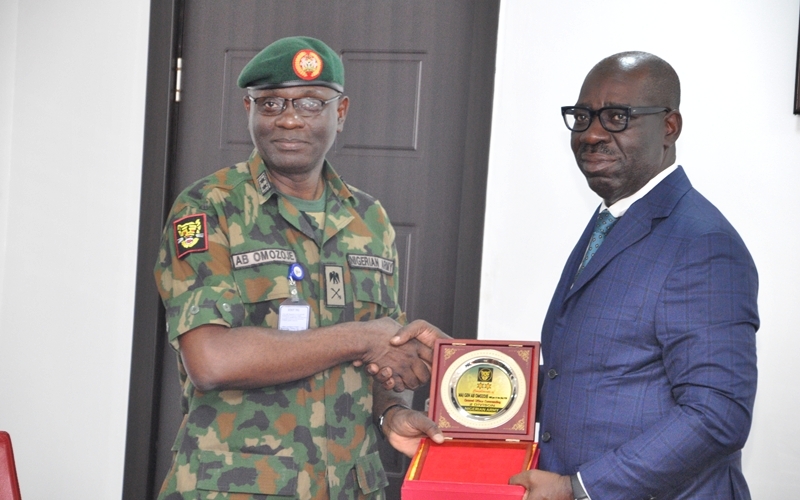 The GOC said that the state remains strategic to Nigeria’s security architecture as it hosts a number of strategic military establishments.

Maj. Gen. Omozoje gave the commendation during a courtesy visit to Governor Obaseki at the Government House, Benin City, the Edo State capital, on Wednesday, August 14, 2019.

He thanked the governor for his administration’s support to the Army, noting that since his appointment, he has been visiting formations under his Command, which Edo state falls under.

Governor Obaseki said security is top priority for his administration, which is why the state government is working closely with security agencies to ensure the security of lives and property.

According to him, “As a government, we are serious about security because we understand that without the security of lives and property, we can’t achieve our goals of providing for the welfare of the people.

“Our state occupies a strategic position in the country. As such, we host a lot of Army formations. We are grateful that the relationship between the state and the military has been cordial.”

The governor commended the Commander, 4 Brigade, Nigerian Army, Brigadier General Greg. Omorogbe, and the Military for being a formidable part of the state’s security architecture and for supporting the initiative. “The Army has been involved and plays a part in the patrols across the state. They have been cooperative in maintaining peace in the state”.

He said his administration will continue to support the Army to discharge its responsibilities, as the state has requested for increased presence of the Army in trouble spots across the state.

“We thank the Chief of Army Staff for his support to Edo State and for bringing the Army Chief of Staff Conference to the state last year,” Obaseki added.