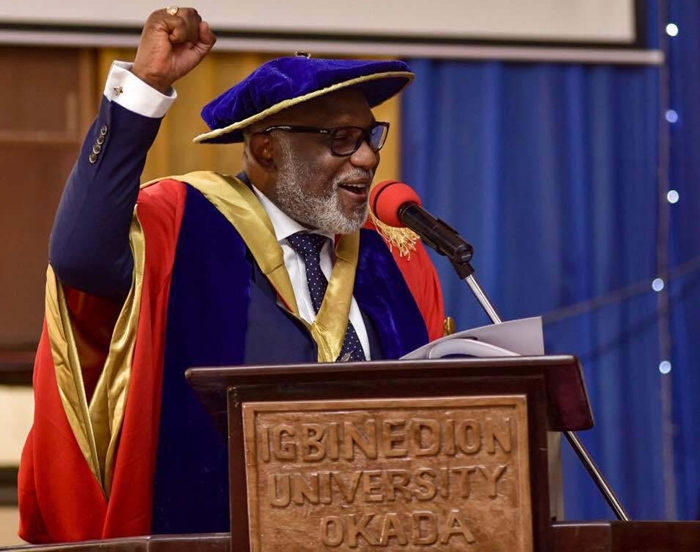 Ondo State Governor, Rotimi Akeredolu, (SAN) has said that it is time for Nigerians to stop undue reliance on the role of governments in funding education as it is unrealistic for governments to provide everything In the sector.

Akeredolu stated this on Saturday at Okada, Edo state shortly after he was conferred with honourary PHD degree in Law during the 15th convocation/award ceremony of the Igbinedion University Okada.

He said unless the people and stakeholders take the issue of education seriously, the nation’s  quest for development would be unrealisable, regrettable and laughable.

“If we all agree that there can be no substitute for good education, if the society is truely desirous of joining the rest of the civilised world, it is unrealistic to expect a benevolent factor called government to provide everything, it is not possible,” he said.

Akeredolu who deplored the disconnect between the nation’s education curriculum and current reality, said that was responsible for the prevalence of millions of young men and women unemployed in our economy that is developing.

He explained that if the nation had continue at the space it was in the first republic, it would have by now be less dependent on other nations of the world for basic need of sustenance.

Akeredolu opined that for Nigeria to sustain growth in the education sector, the citizens and all stakeholders must join hand together to make it work.

On his part, the Edo State Governor, Godwin Obaseki said it is reforming the basic education so as to give the student a strong foundation.
Represented by his deputy, Philip Shaibu, said his administration is giving priority to technical and vocational education to equip the youths with relevant skills and be employable after graduation.

According to him, Igbinedion University has since inception proven to be a great inspiration for other private universities that have been licensed by the National University commission.

Not fewer than 634 students of the university were awarded First Degrees and Higher Degrees at the 15th Convocation ceremony of the institution held  November 25 and 26.