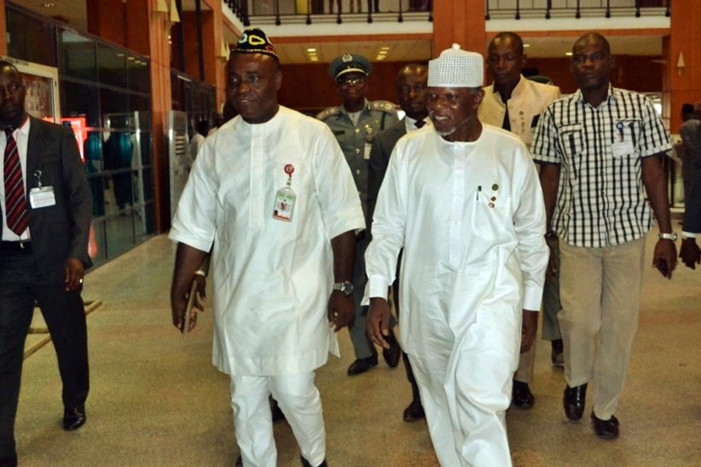 The Comptroller-General of the Nigerian Customs Service, Hameed Ali, was today driven away from the Senate chambers after he appeared before the lawmakers in a non-Customs Service outfit.

Premium Times Nigeria reports that, Mr. Ali’s appearance without uniform, on Thursday after his failure to appear on Wednesday, was contrary to the resolution of the Senate which asked that he must wear “appropriate” uniform to brief them over the now suspended policy on duty payment.

The Senate further resolved that he should appear again next Wednesday in uniform, after the lawmakers took turns to chide the Customs boss.

“Coming was just one part of our invitation, another part is that you wear uniform. Why are you not in uniform?” Ike Ekweremadu, who presided, asked Mr. Ali, after he observed protocols.

Mr. Ali then craved the indulgence of Mr. Ekweremadu to refer to the letter forwarded to him on Wednesday.

After reading the content of the letter, he said, “this letter did not connote that I should wear uniform.”

Responding, Mr. Ekweremadu said Wednesday’s letter was “further to the earlier letters which indicated that you should wear uniform. So this is a reminder.

“More importantly, this is official. We have expected military chiefs and the Inspector General of Police and they all wear uniform.”

Deputy Leader, Bala Na’Allah, drawing from the customs and excise law, argued there is law that compels Mr. Ali to wear uniform.

He said the customs chief was oblivious of the law, saying “I am happy you said you needed legal opinion.”

After the resolution, Mr. Ekweremadu explained that Section 2 of the customs law provides that all officers, including comptroller-general, must wear uniform.

“As number one officer, you should lead by example,” Mr. Ekweremadu said.