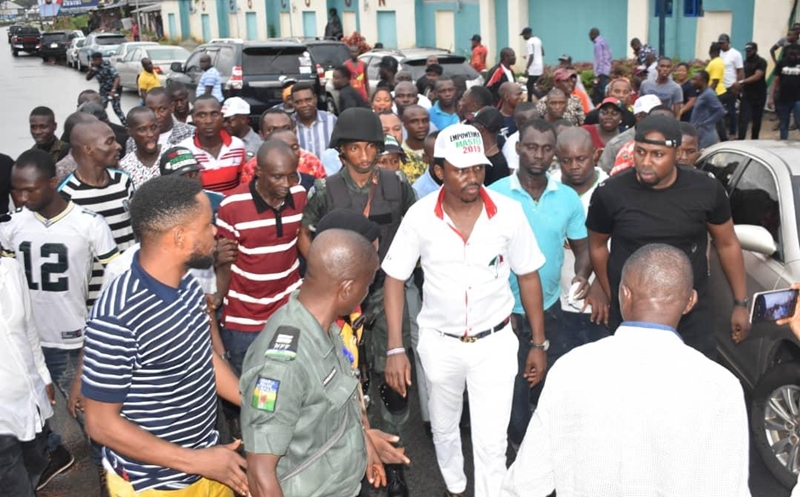 The Deputy Speaker of the Delta State House of Assembly, Rt. Hon. Friday Ossai Osanebi has described his emergence as the PDP standard bearer for the 2019 state house of Assembly election, Ndokwa East Constituency as an act of God.

Rt. Hon. Osanebi in a statement said the victory was indeed well deserved in a free, fair and credible process and expressed gratitude to God for the peaceful conduct of the election.

The statement reads “On Thursday, October 4, 2018 I emerged the winner of the PDP House of Assembly primaries to fly the flag of our great party PDP in Ndokwa East Constituency in the February 2019 general election. It was indeed a well deserved victory in a free, fair and credible process. First and foremost I thank God Almighty and give Him all the glory for the well deserved victory”.

Continuing Osanebi noted “I mustn’t fail to thank members of my immediate family who have always stood by me, leaders and elders of our party, members of my campaign team, women, our teaming youths, friends and associates for their wonderful support”.

“Let me also thank my opponent who accepted the result for his spirit of sportsmanship and that of his teeming supporters for maintaining peace all through the process of the primaries. It’s victory for the Ndokwa East people because we are one big family. I promise to always continue to empower my people and give them purposeful and qualitative representation as I have done in the last few years. I thank you all”.

The keenly contested primaries which was held at Ashaka, a boundary community of Ndokwa East and Ndokwa West local government areas saw the six contender’s fates being decided by the 143 accredited delegates.

The Returning Officer for the election, Dr Henry Sakpra, declared the Deputy Speaker, Rt. Hon. Friday Osanebi the winner, having scored the highest votes in line with the electoral guidelines of the PDP primaries.

Reacting to the development, Rt. Hon. Osanebi said his first and second tenures have been very fulfilling as he had used the position to enhance quality of lives and infrastructure in the local government area.

Stressing that victory is sure in the general election, the Deputy Speaker said: “we return all the glory to God for this privilege once again. You know, man can aspire, but it’s only God that  can give position. I thank our people for the trust they reposed on me. They have today shown me love again, and i will double my effort to ensure  the transformation of our land”.

He thanked the other contenders for their sportsmanship and called on them and their supporters to  join hands with him to build a stronger platform that will give victories to all PDP candidates in the general election.

“I commend my brothers for their sportsmanship. I want to also congratulate them for the attempt. We must put all that transpired during this process that ended today behind us and work to enhance a robust synergy that will strengthen the party more in Ndokwa East. Our goal is to record landslide victory at all levels in the forth coming general election.” Osanebi stated.