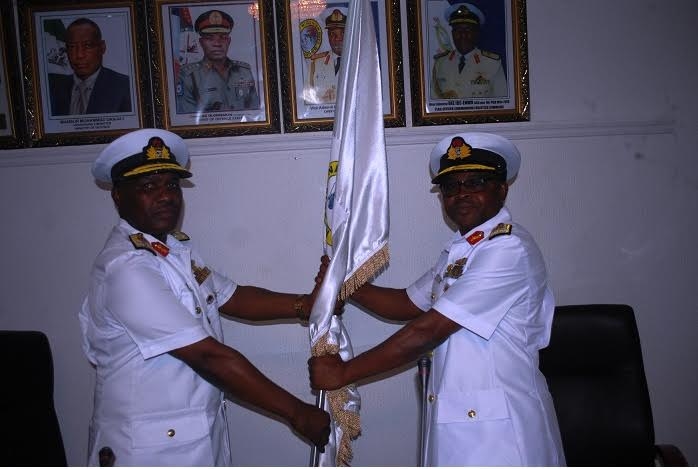 Officers and men of the Naval logistics Command Oghara, Delta State, have been charged to be pro-active with security challenges in the Niger Delta region and as well be dedicated to their duties at all time.

The Flag Officer Commanding Naval logistics Command Oghara, Delta State, Rear Admiral Begroy Ibe-Enwo who handed over the mantle of leadership to a new Flag Officer, Rear Admiral Peter Onaji in a farewell parade mantled in his honour at the logistics command, commended the officers for their support and loyalty which formed the bedrock for his success story during his one and half
year stay in Delta State.

Rear Admiral Ibe-Enwo while addressing the officers with miss-feelings, told them that he was particularly impressed that in line with the Commands motto (Support for Efficiency) Naval officers at the command were able to imbibe the good virtues which he inculcated in them, which is “Drive and the spirit to support the Nigeria Navy operation” to move the command forward.

The Flag Officer who has assumed duties at the commands headquarters Abuja as one of the principal staff to the Naval Chief, appealed to the officers to extend the same corporation to the in-coming FOC to enable him achieve the same level of corporation.

He assured them that he as their eye at the headquarters, he will do all it takes to ensure their welfare is well protected, appealing that they extended the same corporation “not just to their sister agencies like the Army or Airforce alone but to the Police for a peaceful and a better developed country.”

He charged the officers further to allow good conduct, orderliness, good spirit, loyalty and absolute discipline to remain their watch word while doing all it takes to keep out of trouble at all time, “this virtues we must continue to exhibit as we do our work, do not leave for tomorrow that which you can do today, avoid procrastination, maximize your time” he said.

He told journalists that during his days at the command, crime rates in the area reduced significantly resulting with the effective synergy with his command and the Police including other sister security agencies.

The new flag Officer who received the handing over notes including the commands flag at the conference hall, commended the out gone FOC for effectively piloting activities at the command, appealing to the officers to extend same corporation to him so that he could succeed at the end of his stewardship.