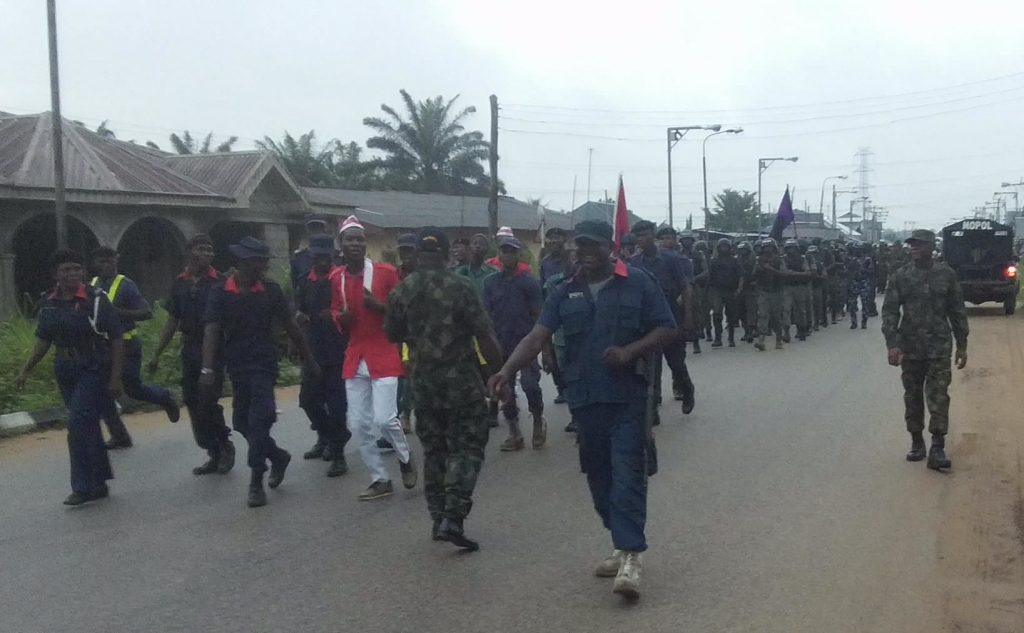 The flag officer commanding Naval Logistics Command Oghara, Delta State, Rear Admiral Peter Agbo Onaji has advised officers of the Nigerian Armed Forces to display the highest standard of professionalism and be of good conduct as they discharge their duties to the Nation.

The flag officer who addressed the combined military and para-military officers at the Naval Logistics Command Barrack, Oghara after a “one day route match” said, they must conduct themselves as members of one family and a team that “brings security to our mother land”.

The FOC further advised them to uphold tenaciously the ethnics of the force as he said “those of us who bear arms in this country, we should display professionalism in weapon handling. All of us should see ourselves as one and friendly forces”.

Rear Admiral Onaji who assumed office at the command’s headquarter in Oghara recently, added, “we must leverage our collective strength to ensure our country remain safe. The enemies must not have upper hand in our quest for peace for this country. The security agencies are capable of ensuring the security of this country. Any enemy of this Nation must be considered as our own enemy”.

Rear Admiral Onaji impressed with the performance of the officers, maintained that they must discharge their constitutional role to this country effectively, remarking further that the successes they have recorded in the outing should be improved upon for its sustainability and that they must put into practice maximally the training they derived so far on the job, “the only way we can show to our high command that has led us well” he said.

During the event which started at about 6am at the weekend, over 300 officers drawn from the Nigerian Army of the 19 battalion Koko and Sapele, Naval logistics command Oghara, Mobile Police Force, squadron 51 Oghara, regular Police, Youth Corps members, Civil Defence Corps, Operatives of the Directorate of State Security Service (DSS) protocols Oghara participated.

High points of the Route Match was, a long walk/jogging which commenced at the Naval logistics headquarters through the major streets of Ogharefe, by the officers, address to the officers by the flag officer commanding the Naval logistic command Oghara, Rear Admiral Peter Onaji which climaxed with a morale song rendered by the FOC “IF FOC is behind us, we shall not be moved, but remain firm like the tree planted by the river side”.

The Route Match is part of a quarterly exercise in the spirit of togetherness and esprit d corps for military and para-military officers within Oghara.