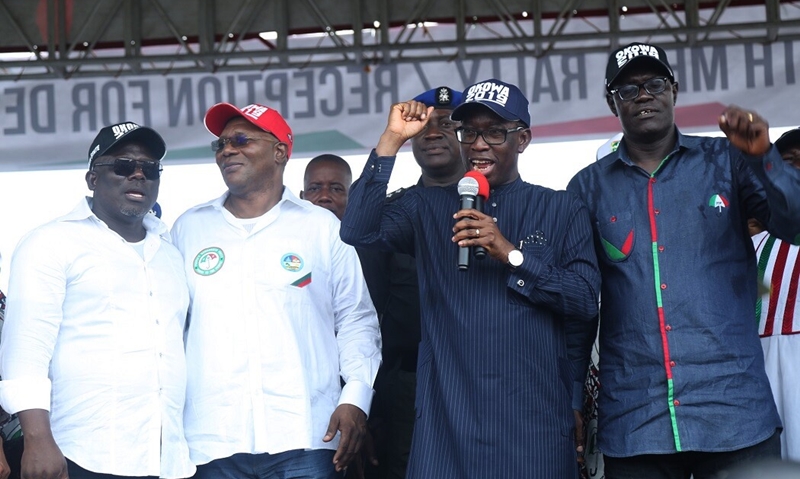 Ahead of the 2019 general elections, Delta State Governor, Senator Dr Ifeanyi Okowa has challenged his opponents to a debate, stating that his opponents visit the state only at periods of elections.

“We cannot deceive ourselves, when you contest election today and after three years and half, a month to election you are back to Delta State to ask for votes, who do you want to deceive? Even their congresses, they are deceiving themselves; the PDP had a free and fair primary elections,” he said.

“In Port Harcourt, 12 persons contested in the presidential primary election, one person emerged and no one left after the primaries because, we live in love and we believe in God; when you have God, you are not afraid, we are on a solid rock but, those who could not conduct elections are on sinking sand; no matter what they do, we are not afraid,” Governor Okowa stated.

Okowa assured, “we will win in all the places, even when they conduct the elections severally, we will win them, they are in disarray, campaign is yet to commence and they have several cases in different courts, that is not how an organised political party should be.”

The governor who received the decampees said, “I must thank all of you for coming to this rally, I must thank all our brothers and sisters who are returning to our party, you are welcome back home.”

Governor Okowa’s Deputy, Barr. Kingsley Otuaro, Chairman of the PDP in the state, Barr. Kingsley Esiso, Hon. Solomon Funkekeme, Prof. Sam Oyovbaire, among others in their separate goodwill message stated that the PDP will get 100 per cent votes in the state.

Hon. Gabriel Mordi significantly tore his APC membership card, saying the achievements of Governor Okowa was attracting members of the opposition political parties to the PDP.

Coordinator of Atikulated Agenda 2019, Chief Greg Onah and PDP chieftain, Dr. Tabs Ogaranya-Tabowe described the success of the rally as good signal that Governor Okowa has endeared himself to Deltans through his people-oriented projects