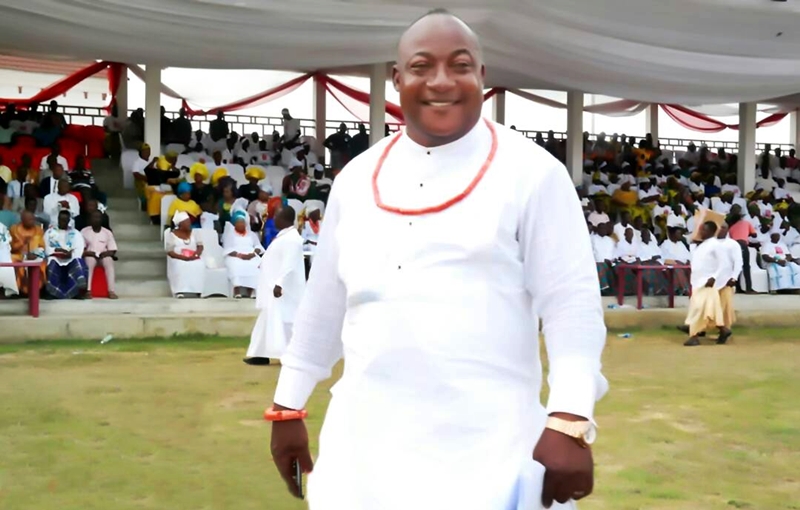 The Spokesman of Gbaramatu Kingdom, Warri South West Local Government Area of Delta State, Chief Godspower Gbenekama (JP) has cautioned the Federal Government against the planned deployment of military men to the oil rich Niger Delta Region ahead of the Gubernatorial and House of Assembly Elections, saying that the militarization of the Region was a call for anarchy.

In a statement he signed and made available to news men in Warri, Delta State on Thursday,  March 7, 2019, Chief  Gbenekama who is the Fiyewei of Gbaramatu Kingdom said that the planned militarization was uncalled for, pointing out that there is peace in the Region, especially the Gbaramatu Kingdom area of Delta State.

He wrote thus; “In the past few days leading to the Gubernatorial and  State  Assembly and elections, I have come across both in the print and electronic media, the plan by the ruling party, All Progressives Congress (APC) in Delta state to influence the party hierarchy at the Federal level to send military personnel to Delta State, to ensure that the APC wins the state by all means. I have also read in the news that President Muhammadu Buhari has  been making statements as to the need of  taking over Delta State at all Costs. As for the Vice President, Prof Yemi Osinbajo, he said recently that Delta state can not remain in opposition.These statements have been corroborated by the Chairman of the APC, Comrade Adams Oshiomhole  and knowing the character of Comrade  Oshiomhole, I am not suprised, but the worrisome part in all these is the actions of  President Buhari when he held security meeting with  security chiefs and directed  the security Chiefs to focus on and send  military personnel to the Niger Delta, and to ensure that the men are sent to the region during the Gubernatorial and House of Assembly Elections”.

“More worrisome is the unguided speech by a youth during the recent town hall meeting held in Effurun, Uvwie local government area of Delta State where he called on the President to send security men to some riverine local government areas in Delta state. According to the report, Bomadi, Burutu and Warri South West were presented as local government  areas where Militants assisted the PDP to rig Elections. May I state here categorically that this statement made by the said youth is very far from the truth. While I cannot totally vouch for some other areas of the Niger Delta because I hear some people were killed in some areas eg, Governor Dickson’s State House photographer was killed in Beyelsa state in controversial circumstances, there was real peace during the Presidential and National Assembly elections in Warri South West Local Government Area of Delta State; it was very peaceful both in Ijaw and Itsekiri areas”, he added.

The Fiyewei of Gbaramatu Kingdom further said that; “Why are people so much in love with crisis? What do they gain by generating crises? As far as I am concerned, the call to further heavily militarise the Niger Delta is a call to crisis and we would refuse crisis in all its ramifications in the Niger Delta no matter who wants to gain from it. We are at peace here, the heavy presence of the military as demanded by the APC would not bring any peace but confusion and rancour. What is the wisdom in sending military to a peaceful area when Nigeria has its hands full already with Fulani herdsmen and Boko Haram killing people at will? The military and the President should direct their energy to those places. The President should know that he is the President of the whole country, that is why he has the legitimacy to preside over the crude oil and gas that is found in my father’s backyard”.

In Gbaramatu especially, in every three kilometres, there would be a pair of houseboat, one for the navy, another for the army across the length and breadth of the kingdom.Any one demanding that more military men be sent to our communities does not wish us well and it means there is a grand design to oppress, subdue and subjugate our people by the APC”.

“While we do not really stop people from voting for any candidate of their choice, this plan to forcefully disenfranchise our people is a hand shake going too far and the reason for sending these military men cannot be any other thing than to rig the elections against the wish of the people”, the Gbaramatu Spokesman said.

According to him also; “The presidential Elections that was held recently, THERE WAS NO MAJOR INCIDENT OF ELECTORIAL VIOLENCE THROUGHOUT WARRI SOUTH WEST AND PARTICULARLY GBARAMATU KINGDOM. Why then is  this call for militarisation of the area. MUST WE BE KILLED BEFORE YOU CAN RULE OVER OUR LIFELESS BODIES? God forbid, I thought this is a democracy, why not allow the people to choose the person to represent them peacefully”.

He called on all sons and daughters of Niger Delta Region to ensure that they keep the peace, “but must also peacefully protect their votes.They should not allow themselves to be used against their own brothers. We are one and we shall remain one indivisible whole in the Niger Delta Region”.

“To the military, I like to appreciate you for not impinging on our rights to vote for the candidate of our choice during the Presidential and National Assembly elections, we pray you still maintain that sense of professionalism you displayed in Warri South West Local Government, particularly in Gbaramatu kingdom during the last Presidential and national assembly elections”, he said.

Chief Gbenekama called on the military to Partner the traditional rulers and traditional institutions to ensure that there is peace in the land, saying that; “Antagonizing the traditional institutions would not yield the desired peace we want. The military can not do it alone. If we can negotiate and struggle to reform hardened Boko Haram fighters, I see no reason why the few bad eggs, as is found in every other society cannot be changed. Why  is our case always different?”.

“To Governor Okowa and his team,we are going to vote for you again,not because you have satisfied us but because you have done better than most governors of this state since inception, we are just giving you another opportunity to prove yourself,do not take us for granted because you have a tomorrow”, he said.

He appealed to the people of Warri South West Local Government, especially the Ijaws and Itsekiris and particularly Gbaramatu people, to sustain the prevailing peace, disclosing that His Royal Majesty, Oboro Gbaraun 11, Aketakpe, Agadagba!, The Pere of Gbaramatu kingdom has directed that,” We must ensure that we maintain the existing peace, so that we do not give the security agents the opportunity to manhandle us whose training and calling is killing of criminals,that is why they go about with guns to scare and ‘deal ruthlessly with ‘criminals’ (borrowing the words of Mr. President)we should mobilise to our communities to cast our votes and also ensure that we peacefully protect our votes”.

He also sent a message across to the people of Delta Central Senatorial District, imploring them to maintain what he described as gentleman rotational arrangements or forget 2023.

According to him;” I have seen in recent times many groups endorsing one candidate  or the other, I also want say that those in Delta Central should try and be their brothers keeper. There is an unwritten understanding in Delta State where Governors are rotated around the three Senatorial zones. The last two came from Delta Central and Delta South. An Urhobo man, Chief James Ibori from Delta Central and an Itsekiri man, Dr.Emmanuel Uduaghan from Delta South. Ijaws who are one of the largest ethnic nationalities are patiently waiting for their turn, so are the Isokos of Delta South. It is disturbing to hear youths of fourteen Urhobo Clans from Delta Central endorsing a candidate from Delta Central. Have we jettisoned the gentleman agreement of rotation? Trust me, any Senatorial district that destabilise this arrangement, should not expect others to respect the same arrangement when they feel it is  their turn. We would not vote for any district that go against this gentleman agreement when the rotation favours them.Am therefore calling on Urhobo leaders of the Delta Central Senatorial zone to ensure that the right thing is done or be prepared to be opposed and be voted against come 2023″.