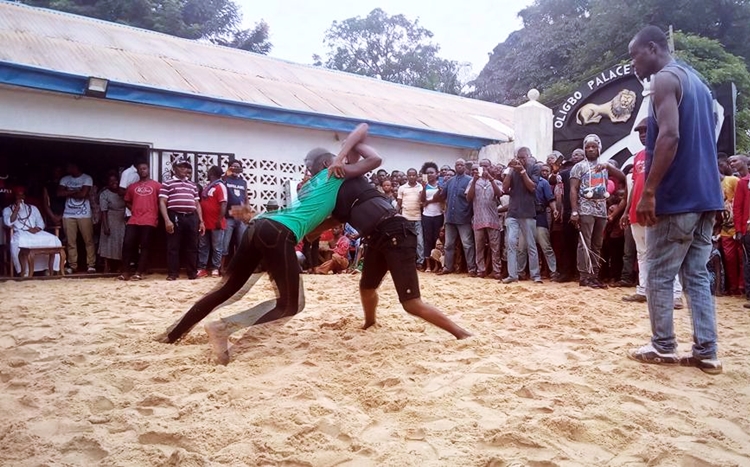 Issele-Uku, the headquarters of Aniocha North LGA was yesterday, Friday 7th September, 2017, agog as sons and daughters at home and those who returned from abroad, including visitors were thrilled with the glamour and spectacles of the festive wrestling (Mgba-Ututu), which precedes the Ine Festival.

The highpoint of the ceremony was the presentation of the prizes to the winners by Obi Nduka, who commended the participants for such show of sportsmanship and competing in a peaceful manner. He urged them to see the unity, peace and love of Issele-Uku as paramount in their heart, no matter what happens. He blessed them and handed them their awards. The Women Category produced only Miss Okonkwo Chinenye from Idumuinei as winner and she went home with a bag of rice and N10,000.

However, the Junior Team Category had Masters Ebuke Nwajei, Chinedu Duru and Emma Nwaobi as first, second and third winners and they all got a carton of Indomie Noodles and cash each.

Earlier, the Mgba-Ututu was hosted at Idumuinei Quarters as usual, where finalists emerged from the different categories. The Idumuinei event which gave it the name “Mgba-Ututu” took place in the morning, after which the grand-finale took place at the Oligbo Royal Palace in the evening, with the Obi and his chiefs seated to watch the eventual winners. Those chiefs that monitored the competition included the Isagba, Chief Fidelis Jigide, Ozah, Chief Victor Isiekwenemgbu, Omeogor, Chief Innocent Nwakpati, Onei, Chief Moses Chidi, Ogodilieze, Chief Emperor, Chi-Obi, Chief Egbo Adigwe, Osodi, Chief Morka and Olikeze Designate, Mr. David Siunoje; while Chiefs Jigide and Isiekwenemgbu acted as supervisors, thereby endorsing what the judges had done.

At the conclusion of the Mgba-Ututu, the Osodi of Issele-Uku, Chief Morka announcement that the Obi had permitted the Night Festival (Ine Uchichi) to take place. But warned that anybody who indulges in any act capable of breaching the peace of the community would be fined seven goats.