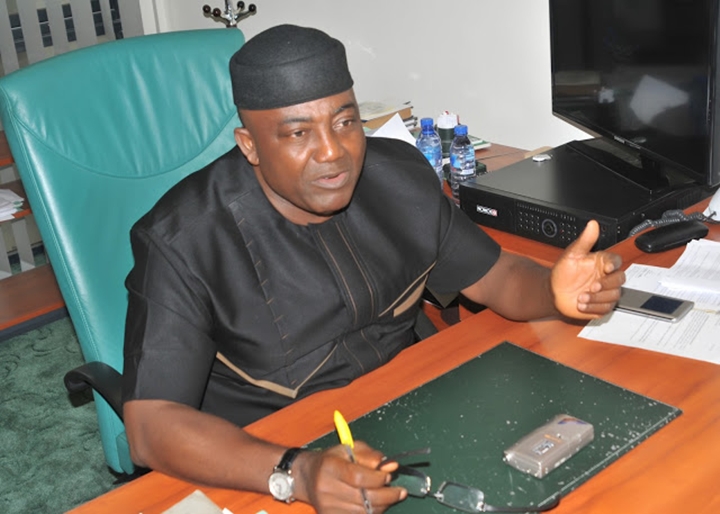 A Former Minority Leader of the House of Representatives, Leo Okuweh Ogor, has been accused by the Isoko For All Group of plotting to remove the Peoples Democratic Party (PDP) member-elect for Isoko North constituency seat in the Delta State House of Assembly, Hon. Jude Ogbimi.

The Independent National Electoral Commission (INEC) had on Saturday, April 11, 2021, conducted a bye-election to fill up the vacant Isoko North constituency seat in the State House of Assembly following the demise of Hon. Tim Owhefere, who was also the Majority Leader of the House.

The group in an electronic statement to Newsmen by its Director of Media and Publicity, Nero Emona, named Dr Paul Owhe, Mr Ogorugba Godwin, Hon. Mike Ogwah, Pastor Jonathan Ukodhiko and Comrade Zino Onaimor, as some of the PDP leaders that are part of the plot with Ogor.

The group said, “Recently, incontrovertible facts have surfaced on how he summoned some party leaders including Dr Paul Owhe, Mr Ogorugba Godwin, Hon. Mike Ogwah, Pastor Jonathan Ukodhiko and Comrade Zino Onaimor to his Abuja residence to plot the removal of their own party’s member-elect, Hon. Jude Ogbimi.

“It is on sound information that these party leaders met and concluded plans with the chairman of the Allied People’s Movement, Alhaji Yusuf Mamman Dantalle at the instance of Hon. Leo Ogor, to overturn the victory of Jude Ogbimi through the electoral tribunal with the promise to bankroll the process financially and otherwise.

“Ordinarily, from the result announced by INEC, the APM’s candidate was nowhere close to victory as it is an unknown party in Isoko and so would be uninterested in any suit whatsoever to seek victory or redress in the courts. However, with this new development, and with the active collaboration of the PDP’s leaders, the party have concluded plans to go to court which is to be spearheaded by Hon. Mike Ogwah on the mandate of Rt. Hon Leo Ogor, as confirmed by our impeccable source who was privy to the meeting.

“Although we remain unscathed and unruffled, we only feel disgusted at the greed of a few who think they have the right to always produce party candidates in every election irrespective of the decision of the majority of the party faithful.”

Meanwhile, in his reaction, Mr Michael Akpodhoma, the Spokesman and Senior Legislative Aide to Hon. Leo Ogor said it is untrue that his boss is plotting to remove Jude Ogbimi, who he worked hard to win the Isoko North Constituency seat bye-election.

Akpodhoma in a chat with Newsmen said, “During the campaign, Hon Leo Ogor was personally in town, that is, his constituency. He campaigned for Jude Ogbimi and am sure those who are accusing Leo Ogor of trying to remove Jude Ogbimi from the victory he just got did not contribute 10 percent of what he contributed.

“This is a man who brought his personal time, his resources to ensure PDP became victorious. Because one, he is the leader of PDP in Isoko North.

“Under his watch, why will anybody of his calibre turn back to say I want to remove the State House of Assembly member he campaigned for and worked for.”

Also speaking with Newsmen the Chairman of PDP in Isoko North Local Government Area, Mr Godwin Ogorugba said he has not been to Abuja this year describing Nero Emona, who issued the statement on behalf of Isoko For All Group as a ghost name.

“How can a party chairman who campaigned vigorously even more than the candidate that comes from his ward … it is not true.

“It is unfortunate the kind of politics we are playing in Isoko now.

“It has never been like this until the ‘Yahoo Boys’ came into politics and they were trying to play politics in the way of their Yahoo System.”