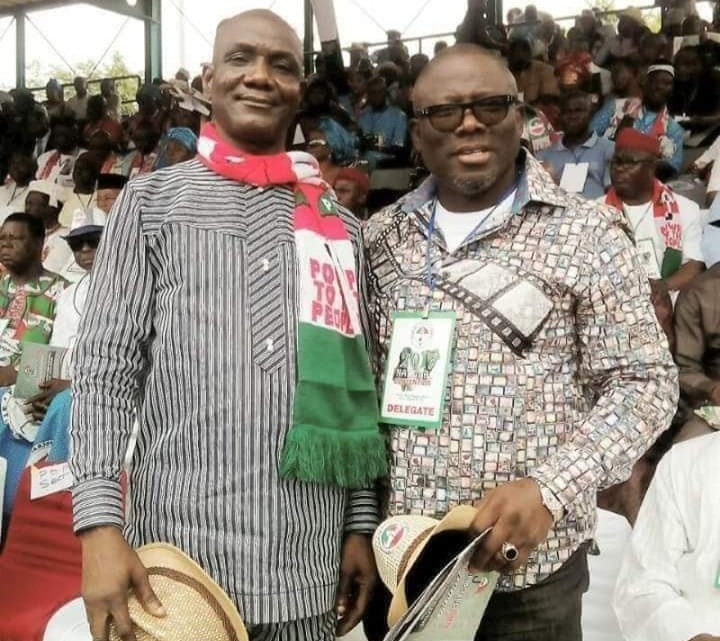 Notice that when people are lying they give long explanations and that is how Fred Latimore Oghenesivbe continues to damage Rt Hon Oborevwori (I don’t know now if he is still Sheriff or now officially Francis) by reminding Deltans of the scandalous contradictions about his true identity and the authenticity of the certificates he claims.

He wants Deltans to celebrate Oborevwori’s clearance by the PDP Appeals Committee to contest for the party’s ticket, but he doesn’t know that Deltans are not fooled by the long talk.

It is also useless attempting to drag the name of Olorogun David Edevbie into Oborevwori’s scandalous muddles about his name and certificates. The only point to take is that the contradictions in everything surrounding Oborevwori clearly shows the difference between him and Edevbie with whom there can never be any shadow of doubt about the integrity of his identity, age, certificates and service records.

Perhaps, Latimore is not aware of revelations that the Appeal Committee decided to cover up in order not to embarrass the party and the state by disqualifying Oborevwori and thus confirming that before our very eyes someone Yahooed his way to become Speaker of the House of Assembly and number three citizen of our state, and that they ostensibly left it for the elders and leaders of the party to manage the situation with wisdom, but such that it does not extend to the party suffering what Okpan and His Ewhere Group of Agbarho described in “No Basket For Rotten Mango” as “foolish man plant mango for road, before he come o, another man pluck am.”

As Dr Ifeanyi Okowa would say, “the elders understand this.”

Regardless of the multitudes of affidavits, the cover ups and allegations of inducements in trail, Deltans know that the questions surrounding Oborevwori’s true identity and the credibility of his certificate are still unanswered

First, contrary to the earlier claim by Oborevwori’s camp that he got his Provisional Clearance at the screening in Port Harcourt without any issues, their confirmation that he indeed was invited for further questioning by the Appeal Panel in Abuja shows there were question marks on him at the screening. So their earlier denial was useless lie, even though typical.

At least, why was it that of the over 10 aspirants who attended the Gubernatorial Screening in Port Harcourt, it was only on Oborevwori that there were stories?

Also, despite their shameless anger and posturing, was it not valid for him to be questioned about how his name or names kept changing in every single certificate he tendered?

Was it not valid to question how it is that his Primary School and WAEC Certificates never identified him as Sheriff, not even with an “S” initial, but clearly and simply as Francis, only for Sheriff to begin to appear in subsequent certificates?

From simply Francis in Primary and Secondary Certificates, he added Sheriff in the degree certificate and eliminated Francis completely in the NYSC Certificate but reverted to assemble all together again through affidavits and, ostensibly, a Deed Poll.

What was all that back and forth, that whole confusion about his own name for?

Latimore and Oborevwori’s aides took long newspaper advertisements to explain to us that Sheriff was a pet or guy name his uncle called him and which he decided to adopt.

If truly he is the Francis that owns the Primary and WAEC certificates, what was wrong with the name Francis? What was the great need to add Sheriff by oath in subsequent certificates and then to do a Deed Poll to harmonise them like people harmonising a dubious list of ad-hoc delegates?

Is it not curious that this adoption of his guy name did not occur at age 36 when he claims to have written the WASSCE? At age 36, how could someone not have been sure of his name or the name he wanted to change or add to his name, only for him to start adding guy name at about age 40 and above through the courts with Deed Poll, Federal Government Gazette etc? All that just to add a guy name?

We all had or have guy names. Some are Bullet, Dragon, Sea Never Dry, Monkey Tail etc. Do people truly go swear affidavits to officially add those stuff to their official documents? What was the great need? Is that not ordinarily and sufficiently suspicious?

Deltans can see through all that. They know street and it’s incredible runs. No one is fooled.

And that also raises the issue of the contradictions in his date of birth. The WAEC certificate with the name of Francis (without Sheriff) says he was born on November 17, 1979. Sheriff says the certificate is his own, that he sat for the exam himself but that Francis who wrote the exam made a mistake in the filling of his date of birth in the WAEC form.

True, no one is above mistake but can we examine the mistake, please? How come he completely missed everything about his date of birth? He missed the year, he missed the month, he missed the date!!! Of his own birth! For somebody who was 36 years as at the time?!!

If it had been typo error on one item, say the date, one can understand, but on everything – year, month and date?!! Was his brain leaking?

Seriously, was he possibly thinking himself to be someone else or seeing someone else in him, probably his younger brother or cousin?

For a certificate that was issued in 1999, he couldn’t detect and correct the date of birth until 2003.

If he graduated from the university in 2004 and the affidavit changing his 1979 date of birth in the 1999 Certificate was done in 2003, it means that even at the point of entry into the university and up till 300 level he still didn’t see and know that the age on his WAEC Certificate was wrong. Would that be daft, negligence, afterthought, lack of personal organisation or what?

And such is the character some guys are proposing to be Governor of Delta State? Haba, people!

But Deltans know this levels. It is truly street credibility. With all the plenty affidavits, Deed Poll, political cover ups and sorting, somebody thinks he is hiding well behind the door but we can see his legs. It is called legging…ha ha ha.

Party is supreme, we know, but may Delta PDP not give birth to its own enemy. Amen.

Okowa Has Continued To Make Us Proud – MSD
The Arena: Ima Niboro And The Burden Of Managing Tainted Reputations
Advertisement