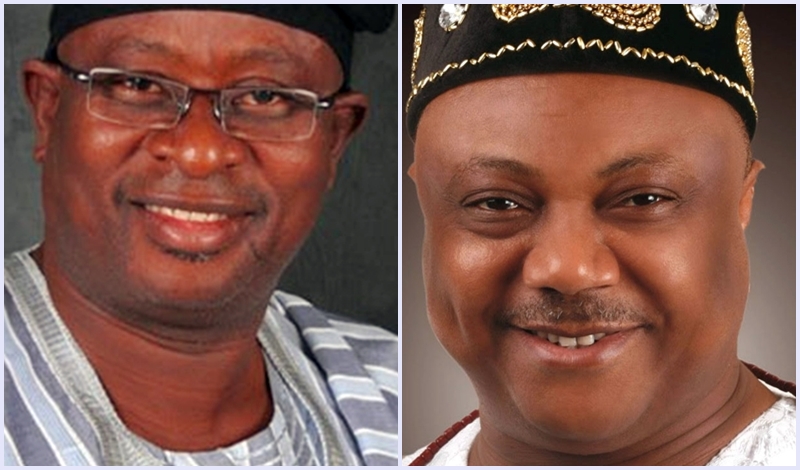 I read with a subdued amusement if not a deepening embarrassment, Olorogun Kenneth Gbagi’s interviews on Saturday Vanguard of January 5, 2019 and the subsequent online vituperations.

I do not and cannot sincerely understand what spurred Gbagi’s insipid voyage of hate and tantrums against Olorogun Great Ovedje Ogboru beyond political survival. And it is understandable that the man from Oginibu in Ughelli South Local Government Area had to become the mouthpiece of PDP and in particular, Dr Ifeanyi Okowa, the governor of Delta state.

It was Governor Okowa indeed that shocked the world by shunning the universal safety standards to commission Gbagi’s Robinson Gbagi Mall and the 18 pomp Falcon Bay petrol station built directly under high tension powerline. Gbagi preferred to subject the lives of hundreds, if not thousands of his people to the horrifying danger of electrocution as long as he continued to earn his cash. And if governor Okowa could shut his eyes, his heart and mind to endorse and commission this screaming danger, what then would Gbagi not do for a governor that literally gave him a license to kill his people if only that would keep his business going and his political subservience inexorable.

Now, for Ogboru’s reaction to Gbagi’s abhorrent and obnoxious attacks, the ex-junior minister is chanting songs of being an elder and how unsavoury it is for Ogboru, an Urhobo son to attack an elder of his clan. But let us pause and hear the voices below and see whether there is an eerie feeling of déjà vu in Gbagi’s giddy clangours.

“We have decided to educate Kenneth Gbagi that his ill motivated advice is totally unacceptable and not in the character of a true Urhobo son or daughter to show this level of disrespect to a senior under the pretence of ‘advising him’……We expect that ex-Ministers including Ministers of State should conduct themselves with some level of dignity and not desecrate their past offices to the extent that people are asking how the individual managed to become a minster in the first place”.

Sorry, the above caustic voices are not from Ogboru. They came from the Urhobo Collective Agenda of Nigeria, UCAN.

The Chairman and Secretary-General of the council of this noble trado group, Ighogbado Emuesiri and Enaowho Dominic, respectively, were compelled to issue this corrosive statement after one of Chief Kenneth Gbagi’s insidious outbursts. It was in 2014. Gbagi was burning with ambition to rule Delta state even when he knew deep down in his heart that he didn’t have the vaguest chance and no one indeed took him serious. But driven by desperation, Gbagi called a press conference in Warri. He did not give the gathering a single agendum on his plans for Delta, not a manifesto. His sole reason for the conference was to ask Prof Amos Utuama, Senior Advocate of Nigeria, SAN and Deputy Governor of Delta state, to step down because he was too old to contest for governorship of the state. Gbagi who is a lawyer, but with a mind blurred and befogged by political desperation, forgot that no part of Nigeria’s constitution stops an aspirant to any political office on account of old age. And to think that Gbagi’s despicable speech was directed at a man who lectured him in the university, on the very legal profession he is always quick to proclaim as a lawyer.

It is not therefore surprising that Gbagi could make spurious, mendacious statements and outright lies about Ogboru. If he could make such loathsome remarks about his lecturer and a Deputy Governor, why would his wild and vile comments about Ogboru surprise or worry anyone.

He described Ogboru as a fish seller. But if Gbagi is not completely untutored on Nigerian’s corporate history and landmark business strides, he would have known that Ogboru’s fishery firm, Fiogret by 1987 had become a multi-billion naira business conglomerate and Ogboru, one of the most successful business men in Nigeria. But in his uncommon humility, he drove a Peugeot 505 as official car and sat always in front with his driver.

Ogboru’s Sofimar Express Limited in 1988 signed a multi-million dollar fishery contract with then United Soviet Socialist Republic, USSR government, under the leadership of Mikhail Gorbachev. The Sofimar Express Venture was set up with a paid up share capital of US$5 million; an amount that remains unsurpassed, perhaps till today.

Beyond his Fiogret and Sofimar Express, his fishery firms, Ogboru indeed ventured into other highly successful businesses, setting up Grato Furniture Limited, GLE Finance, Abraka Robber Industries, Ajalomi Shipping Company Limited, Alfa Bond Nigeria Limited and was given a licence in 1988 by the Central Bank of Nigeria to set up a bank.

How can any man describe such a man as jobless? Gbagi claimed that Ogboru vowed never to contest election and perhaps trekked to James Ibori’s house where he waited endlessly for the man until he dozed off. The question that should follow naturally here is, why did it take Gbagi 15 whole years to reveal this? How is it that he couldn’t air this slapdash and slipshod secret all along? May be someone should advise the former junior minister to also appreciate his age and the status he has attained in the society, so that he could weigh the words that drop from the inner recesses of his soul, for he seems to have descended to an all-time low in this interview. He appears now to be a loud and perilous symbol of how not to be an Urhobo elder. How is it that even Ibori could not voice out these encounters with all the nightmares that Ogboru caused him and almost finished him politically with his ex-convict legal battle?

Here was a man who said he would not join issues with Ogboru in one breadth and in another he said Ogboru was uneducated. Gbagi made categorical statements on issues he seems totally ignorant. Even though it is a known fact except perhaps to the Chief whose governorship ambition was long brutally fractured, Ogboru holds two authentic post graduate degrees- an MBA from the University of South Dakota, London Campus and a Master of International Relations from the University of Kent in Canterbury, United Kingdom. And Ogboru has his certificates intact.

But here is one subject that rankles and totally contradicts all logic. It is Gbagi’s mouthing of power rotation among the three senatorial districts. Gbagi insists that Okowa, a Delta North indigene, must be allowed to complete his second term. And he screams, “Agreement is an agreement; they (Urhobos) should defend this agreement to prove they are people of integrity”.

Now, there is nothing wrong with Gbagi’s obsession with absolute adherence to rotation. But this is as long as it is limited to his party, PDP. Will it not be bizarre and ludicrous to force a PDP policy on another party? Will such a party not be accused of acute psychopath to seamlessly accept the policy of another party, an abysmally failed party at that? If indeed APC feels strong about a rotational policy, it will of course take effect when they have won an election. It will be a mindless, pea-brained and moronic idea for APC to rigidly zone power to a particular area based on PDP’s policy especially when you are not sure that the particular zone you had in mind would strongly challenge and defeat the incumbent governor. The General Abdusalami Abubakar military government zoned power to South-West understandably because of the annulment of the June 12 election won by MKO Abiola, a Yoruba man from the same zone to atone for the mortal sin of the military , compensate the  South-West and bury the ghost of injustice.

The APC zoned the Presidency to the North because they saw in General Muhammadu Buhari, based on electoral antecedents, a candidate that could defeat the incumbent  president of the time, Dr Goodluck Jonathan. And they succeeded. In Delta state today, and those who delude themselves may doubt this, but the hard fact, the unassailable truth is that only Great Ogboru and perhaps former governor, James Ibori can be said to have cult followership. But while Ibori cut his cult figure with squandering of state fund, undue  patrionage and illicit empowerment of his friends, Ogboru earned his cult figure with his demonstration of love for Deltans, his incorruptibility,  courage and untramelled integrity. To rotate power therefore, you have to strive to possess it. And to possess it , you have to open the contest for all and let the best candidate emerge. Then, you can begin to peep into the issue of zoning if it pleases your party, for this so called zoning or rotation iit must be emphasized is an indictment of leaders, a failure of leadership. If leaders did their job of good governance no one will be talking about zoning power to his brother, aunty or whatever in the name of rotation. Gbagi’s pie-faced aggression against Ogboru and APC on this issue is therefore, at best, theatrics of a poor comedian.

The old junior minister is desperate to see Ogboru in a debate with incumbent governor, Dr Ifeanyi Okowa. The question one may ask again is where was this debate-love Chief when Okowa shunned the same exercise in 2015?

Ogboru was at Grand Hotel in Asaba for the debate. But Okowa could not show up because PDP was in power and for them, the instruments of coercion were in their hands. Therefore they decided the fate of elections and candidates. They used the police, soldiers and INEC to allocate election results. So, of what use was debate when the final result to be announced by INEC was theirs to decide. And Okowa did not give any reason for not appearing at the debate. It wasn’t necessary. Ogboru only left after making an appearance when it became clear that then PDP candidate, Okowa would not show up. And if one may ask, what was Gbagi’s reaction then? Did it slip his heat-oppressed mind?

So, why has Okowa fallen in love with debate now, so much so that Chief Gbagi has become a megaphone to herald his new creative romance? Are they scared that Ogboru now on the side of power may deploy those agents of state in the ugly ways they did?

I have cheering news for them. Chief Gbagi and our dear governor need not worry about anything. Ogboru is a different breed; a strong breed, a man of iron-cast integrity. It is these traits that made the good people of Delta state to love and adore him. That’s why they call him the People’s General. So, even if he is given all the power in the world, he will never manipulate election results. He will not, because he is certain that in a free and fair election, he is sure of a definitive result, a decisive victory. He has done it before but he was denied his victory. Come March 2, 2019, Deltans will do it once again. They will vote for this scion of Abraka. And it will be a free and fair election. He is sure to win because PDP will not be in a position to manipulate the results. And yes, on May 29, 2019, Olorogun Great Ovedje Ogboru, the People’s General, will be sworn in as governor of Delta State. Olorogun Gbagi and his co-travellers now living with a blinking hope may begin to adjust to this tough and inevitable reality.