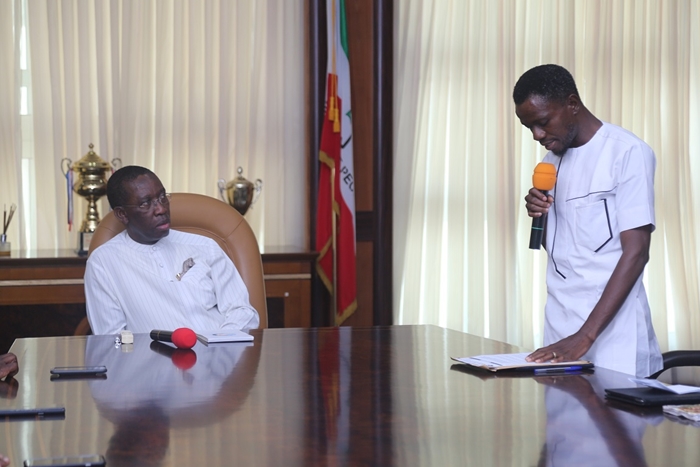 Members of the Asaba Correspondents’ Chapel of the Nigeria Union of Journalists (NUJ), Delta State Council, have commended Governor Ifeanyi Okowa on his achievements in developmental projects across the State.

The Journalists gave this eulogy when they paid a courtesy visit to the Governor on Wednesday February 7, 2018, at Government House, Asaba.

Speaking on behalf the Journalists, chairman of the Chapel and leader of the delegation, Comrade Paul Osuyi thanked Governor Okowa for his friendly disposition to journalists and his developmental projects in the state which has earned him several awards from reputable institutions across the country.

Osuyi said; “Let me first thank you for the support and encouragement that your administration has been giving to practicing journalists in the state in general, and the chapel in particular since your assumption of office as governor on May 29, 2015. The commitment of your administration towards the welfare of journalists is aptly demonstrated in your desire to complete the Delta State NUJ Secretariat, along Marian Babagida Way, here in Asaba. We are convinced that with what you have done so far, that project will not be abandoned.”

“While congratulating you once again on your recognitions and achievements in office, we want to add that you should not relent but explore more ways of giving venting to the ‘prosperity for all’ slogan as encapsulated in your administration’s SMART agenda, so that Deltans and indeed all residents will feel the impact of your administration.”

The Chapel leader also pledged the commitment of its members in sustaining the partnership with the state government through fair, objective and balanced reportage of events, especially political happenings as we approach the season of elections in the state.

Receiving the Journalists on the visit, Governor Ifeanyi Okowa described the press as great partners in achieving desired results for the people.

Okowa noted that since he took the mantle of leadership of Delta State as Governor, the Nigerian press have been partnering with his administration to ensure that things are done right for the electorates, assuring that his administration will remain focused to achieve the prosperity agenda for all Deltans.

“We have been working closely with the press and we can confidently say that the press is partnering with us to succeed; we will not lose focus, we will remain on our goals and we pray that God will always grant us success.”

He reassured Journalists in the state that his administration will support the Delta State Council of the NUJ to have a befitting Secretariat in Asaba.

“The storm drain is a well designed project, it is 2.4 metre in diameter at the discharge point and it is to drain the DLA (Direct Labour Agency) and Jesus Saves Roads flood water, the one from Okpanam is a 3metre diameter while the one that will drain flood water from DBS and its adjourning areas have also, been awarded,” the Governor disclosed, emphasizing, “we hope that when all the projects are completed within 12 months, the people who were affected will be relieved.”