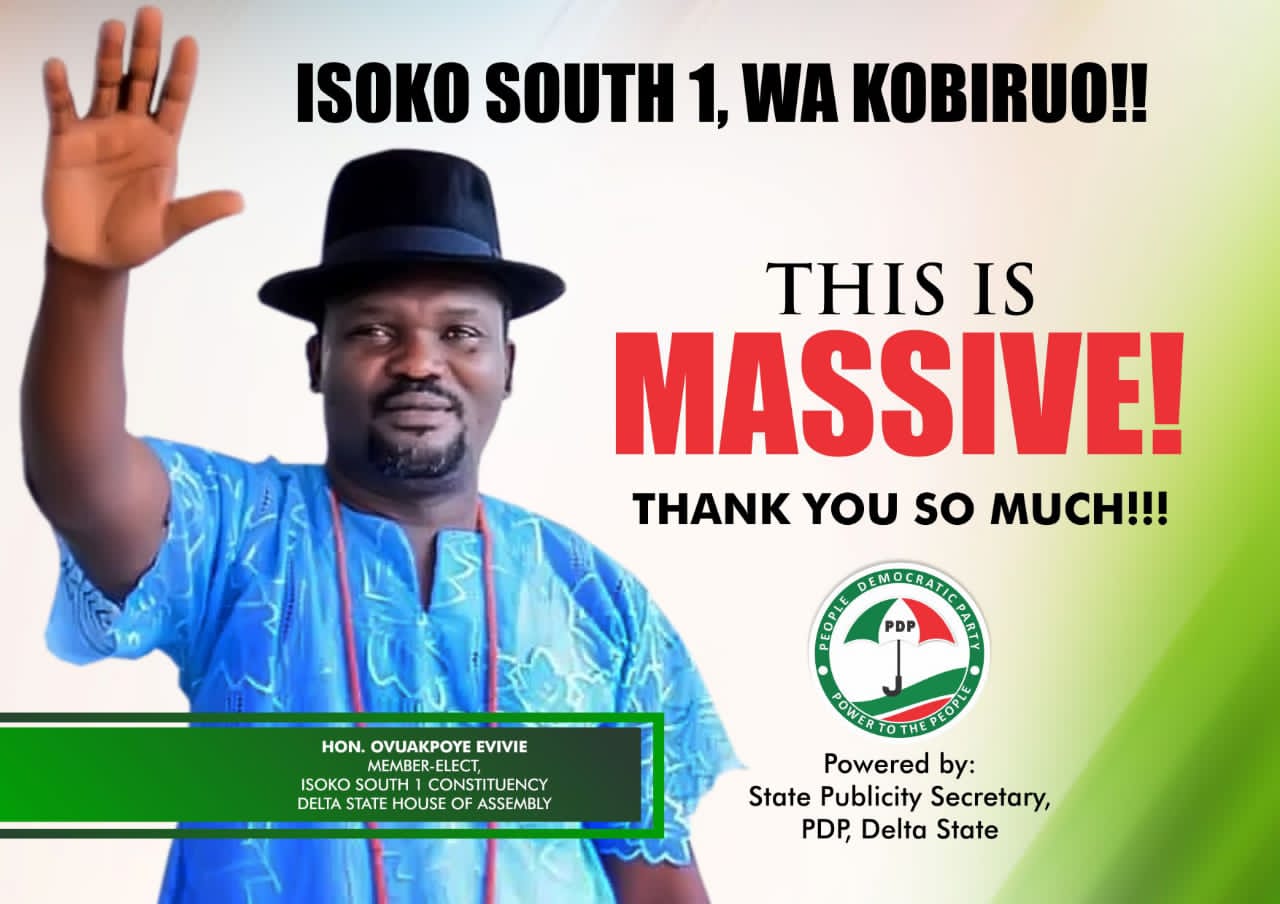 The Peoples Democratic Party, (PDP) in Delta State, has congratulated party faithful, supporters, and the people of Isoko South Local Government Area, for doing the party proud with their votes and ensuring the resounding victory of the PDP, in the bye-election into the Delta State House of Assembly, on Saturday, September 11, 2021.

The PDP, in a congratulatory Press Release signed by the State Publicity Secretary, Dr. Ifeanyi Osuoza, expressed gratitude to the people for believing in the party, saying that the resounding victory has profoundly accentuated the point that the people of Isokoland, nay Deltans, love our party and was a clear and emphatic statement of the party’s overwhelming supremacy in Isoko South Constituency 1 and Isoko nation in general.

The statement reads: “Delta State PDP is overwhelmed with gratitude to the good people of Isoko South Constituency, our party leaders, faithful members, supporters, and the entire Isoko nation, for the resounding victory which delivered our candidate, Hon. Ovuakpoye Evivie to the Delta State House of Assembly, in the Isoko South Constituency 1 Bye-Election held on Saturday, September 11, 2021.

“For the records, the PDP and our candidate, Hon. Evivie polled a total of 6,957 votes, to beat its closest rival, the opposition All Progressives Congress (APC) candidate that polled a mere 1,301 votes and it is even shameful that both the APC State Chairman and their candidate in the Isoko South Constituency 1 Bye-Election, were roundly and comprehensively defeated in their units and wards to make the victory even sweeter.

“There’s no doubt that our landslide victory at the Isoko South Constituency 1 Bye-Election is an unequivocal and loud statement with echoes of unblemished transparency and of PDP’s strong footing and supremacy in the politics of Delta State.

“Accordingly, we are expressing gratitude to our dynamic and amiable leader, His Excellency, Senator, Dr. Ifeanyi Okowa (Ekwueme) for his committed leadership style that uprooted and demystified every pretension of our opponents to claims of being grassroots politicians and therefore invincible.

“The PDP machine effectively led by Governor Okowa shattered and made mincemeat of the false claims, exposing the APC Chieftains as diaspora “Generals”, who lack political troops in the grassroots.

“They are so-called ‘generals’ who whip up sentiments, make noise, and play to the gallery. Deltans, as the Isoko South bye-election results have again proven, and have underscored the fact for the umpteenth time that Delta State is PDP and PDP is Delta State.

“We congratulate our candidate, Hon. Ovuakpoye Evivie and our leaders and party faithful, in Isoko South, whose combined efforts, synergy, and focus, made this victory possible.

“Let’s continue to support the PDP and rally around the party with unity of purpose towards achieving the ultimate salvage mission of retrieving our fatherland from the suffocating stranglehold of the APC for the general good of all.

“It is a mission that the PDP is committed to achieving and can only be possible with your continued support.